As well as joining in the anti-Brexit protest in Cardiff, we also went shopping. I bought some new walking shoes and while we were exploring the big Waterstones bookshop, I spotted a friend's book out in the wild.

readthisandweep no longer posts on LJ, having abandoned us for the bright lights of Twitter and the main streets of Facebook, but some of you may remember her talking about writing her novel Ghostbird.

Here is is, out in the wild! 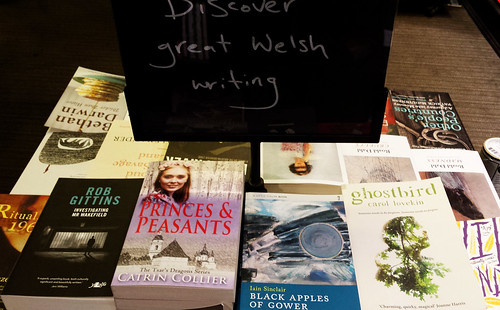 The day after we went to the protest in Cardiff, we met our children, plus their spouses and the grandchildren in the forest at Garwnant. It turned out to be an excellent location with a wide variety of trails. We'd stayed overnight in Merthyr Tydfil, but there is little to do in Merthyr first thing on a Sunday morning, so we arrived at Garwnant some time before the family. This gave us time to eat a breakfast of bacon rolls before going to explore.

This is one of the statues that greet you as you pull into the car park. I have to admit to doing a double take when I first glimpsed it because it looked for a moment like a man taking a pee! Looking more carefully revealed the over-large head and strange ears and that it was in fact a statue of an ogreish sort of person. 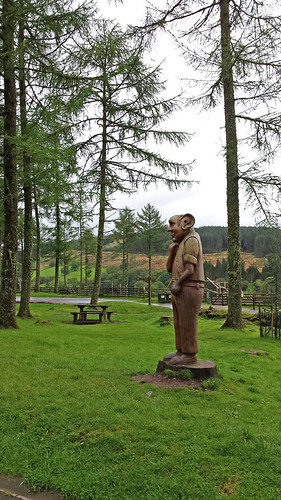 View looking out over the visitor centre where we ate breakfast and showing the ogreish person more clearly. 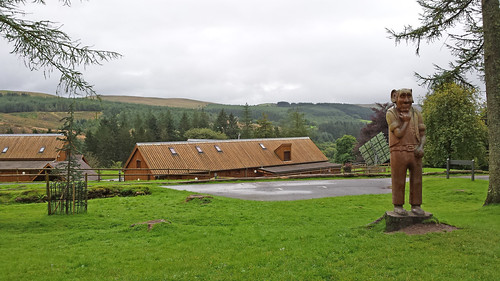 We decided that the narrow road alongside the reservoir was not likely to be chosen for the family outing, so that's where we went first. The weather was dampish, but not actually raining, which was a relief after the torrential downpours of the previous day. There were glimpses of the reservoir through the trees. 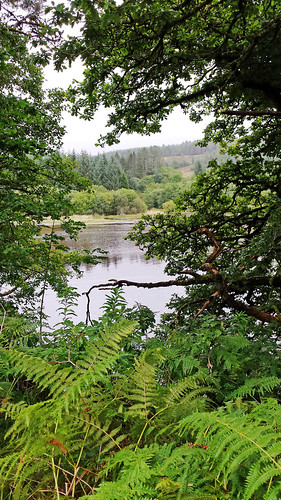 It looked beautiful, but each stile and path led to a sullen fisherman, ensconced with all their gear, and not looking kindly on intruders who wanted to take photos. There also lots of dire warnings about the dangers lurking by the reservoir. They really didn't seem keen for people to be there, despite the inviting stile. 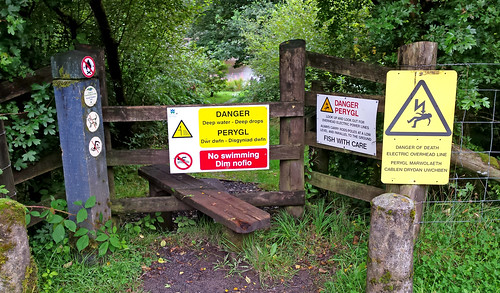 We turned back after a while and met the family back at the car park. We had a nice walk which even little A (who is 4) managed and the 3 grandchildren followed the clues and filled in the worksheet as we found each animal sculpture dotted at intervals along the woodland trail. Then, after a very nice picnic provided by our daughter, we bade everyone farewell and set off north, reaching home in the early evening.

A few minutes ago, there was a loud bang from the kitchen. Graham and I emerged from our studies to investigate. A smell of burned electrical something or other hung in the air but, mysteriously, everything was working. The lights were OK, the dishwasher was still sloshing gently and the fridge freezer was happily burbling to itself. The microwave and cooker were fine, as was the kettle. None of the plugs were hot to the touch. We stood there baffled for a while until finally we thought to check the ancient radio. It was dead. Sniffing it revealed the source of the burned electrical smell. Of all the things in the kitchen that could have gone bang, the radio was the most expendable, but I'll have to buy a new one tomorrow.
Collapse