The apartment we rented for a few days turned out not to be in Camden, as we had thought when we booked, but right by Euston Station. That actually turned out to be more convenient, especially for the Friday when we travelled home. However, Camden isn't far from Euston, so on the Wednesday we just set off walking and soon arrived at Camden High Street.

I don't think I've ever seen so many tattoo parlours all together in one place before. Masses of things to buy, unfortunately, none of it is the sort of thing I personally would want.

Just a couple of minutes walk from this busy scene you reach Camden Lock. 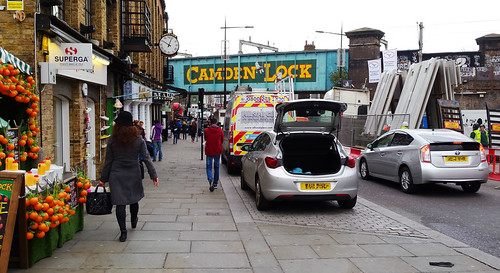 At this point you can leave the road and take to the canal towpath. I've taken photos of Regent's Canal before so as the weather was rather grey, I didn't bother this time. You'll just have to imagine the peaceful lapping water, the large houses and the geometric cages of the aviary in London Zoo. ( Collapse )

By the time we reached Hyde Park corner, my feet had had enough. G was still full of energy, so we parted company. He went off exploring (and ended up at Clapham Common, whence he caught a train back to central London), I caught the Tube to St Paul's and visited the London Museum.

The museum is arranged chronologically and we had covered the pre-history on our last visit. I therefore started at the Romans and worked my way slowly through the exhibits until I reached the Saxons. So many of the finds in this museum are recent. The V&A and the British Museum are full of things that were donated or acquired many decades ago, but the London Museum displays lots of items that have been found during the massive construction boom that has occurred recently and which still continues. Apparently you have to dig down through 6 metres of rubbish to get to the Roman layer, but with new foundations being dug and the Crossrail tunnel boring its way across London, new finds are being discovered all the time.

Realising that there was no way I could see everything before I had to go and meet G, I skipped the plague and the Great Fire and moved on to more modern times, passing quickly through the Victorian streets (genuine shop fronts and shop contents rescued during the redevelopment that took place in the 60s and 70s) to the Olympic flame from the 2012 London Olympics and the Lord Mayor's coach. 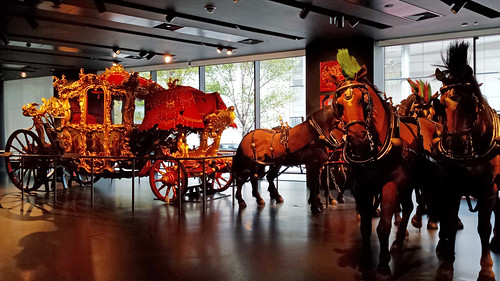 Apparently it cost £850 back in the eighteenth century. It may have seemed expensive at the time, but as it's still used every year, they've really got their money's worth out of it!

I then caught the Tube back to Embankment station, where I met G and we went for dinner at our favourite pizza restaurant before heading back to our apartment.
Collapse