Here we go again! It's a new year, it's a new weekly alphabet challenge.

This week's theme was: A is for Artistic

As I'm not going to have much time for the rest of the week, I've done an artistic treatment of one of the photos I took on Monday on our walk in the Rhinogs.

Though I liked the artistic filter, I felt it was lacking something so I added a fancy frame. In case anyone is interested, this is the palette knife filter in PhotoShop Elements. 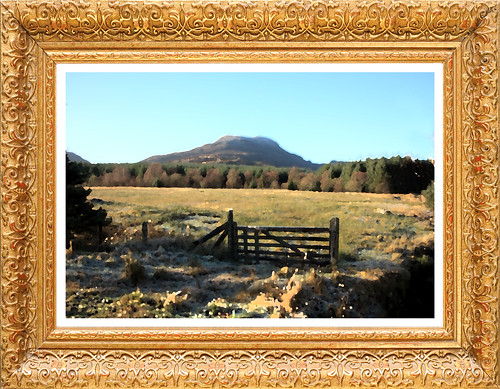 G wanted to explore another potential location for the geology book, so on Monday we set off to walk up the Trawsfynydd side of the Roman Steps.

The Roman Steps are not Roman and mostly are not steps, but that's the name of the footpath that leads from Trawsfynydd to the coast. There are places where there are rocky steps, but they're not Roman and the trail is reputed to have originally been part of the Medieval pack horse route from Harlech to Chester. I'm sure, however, that people have been crossing these mountains at this point since well before the Romans came, but there are Roman remains near the Trawfynydd side of the trail and in earlier times, anything ancient was given the label "Roman".

The day was very bright and clear, which meant there had been a sharp frost overnight. The single track lane leading up into the forest was very icy in places, but we made it safely to the car park. To our astonishment, there were several cars already there and the car that had been behind me on the main road had also followed me down the track. We hadn't realised the place would be so popular on a cold winter's day.

Rhinog Fawr (Big Rhinog): View near the start of the walk not long after leaving the car park. 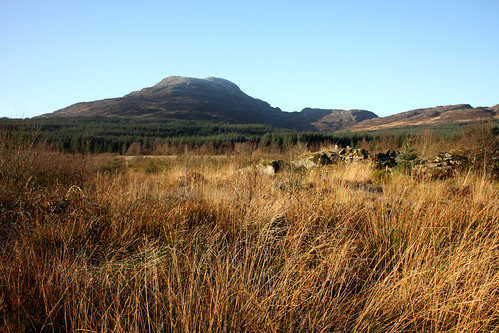 It was a gorgeous bright January day, but very frosty on the higher ground. 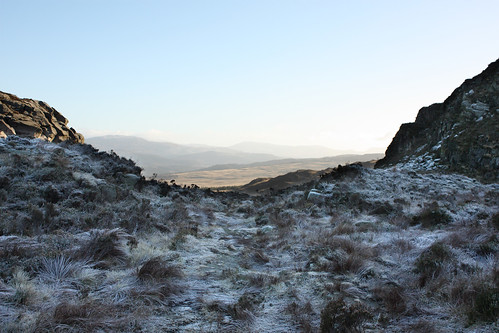 It was also very difficult to take photos because of the contrast between the shaded foreground and the bright mountains in the distance.

Here's the point where we turned back. It's the top of the pass and gives a lovely view of Llyn Morwynion. It was so still, the lake was like a mirror. 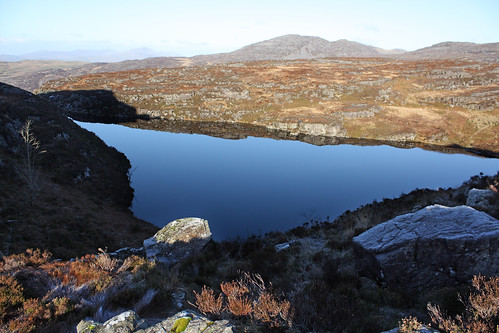 Llyn Morwynion means "Lake of the Maidens". According to the Mabinogion, Blodeuedd's maid servants fled in terror when she was turned into an owl for her infidelity, but the girls lost their way and drowned in a nearby lake. However, I don't know whether they were supposed to have drowned in this lake or the one on the other side of Maentwrog which is also called Llyn Morwynion. Until this week, I'd always assumed it was the other one, but if they had decided to flee over the mountains to the coast, it would have been this one. I suspect it will have to remain a mystery.
Collapse