We had intended to go out today. The plan was to call in at Porthmadog, drop G's watches off at the jewellers to have a new battery fitted in one and a new strap for the other, then we'd go off to look at some locations for the geology book before returning via Porthmadog to pick up the watches on the way home. Unfortunately, the mist and/or cloud is down so low that we can't even seen the nearest hills, so today will be a Getting Stuff Done Indoors day instead.

I think I've mentioned before that G signed up for an Open University ecology course as being the cheapest way to gain access to an academic library. Also, new course!
Anyway, it involves practical work and we've already visited sand dunes, done the experiment where we had to take the temperature of the soil under oak trees and the next thing was an experiment to determine soil composition and record temperatures at the surface and two different depths.

Fortunately we were able to do this at the bottom of our own garden, so we dug a narrow hole, set up the digital thermometers with their probes in the soil at the prescribed depths and with the gadget itself sheltered from any possible rain by a bucket lying on its side. Then the temperature readings had to be taken at regular intervals for the next 24 hours. Because G is not good at mornings, I volunteered to do the early ones, though I drew the line at 6.00 a.m. and compromised on 6.45 a.m., which is only a little earlier than my normal getting up time.

So that's how I came to be standing at the bottom of our garden at the height of the dawn chorus...

This is a still photo of the trees on what we call "The Swamp" with the sound file of the bird song. (Length just over a minute) 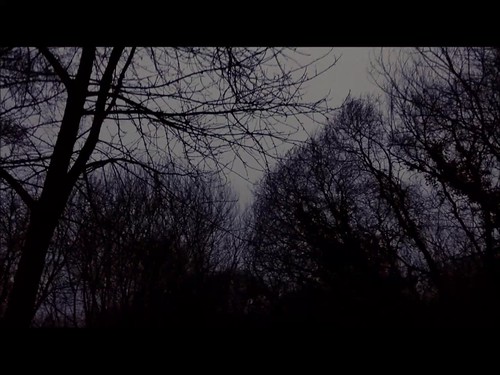 There are a lot of trees beyond our garden. Though it was an open field when we moved in, because the land floods and can't really be used for anything, it's just been left to go wild. As a result, there are a lot of birds. This is only the start of the dawn chorus, it will get louder and more intense as the weeks pass and we go through the breeding season until we get to around May, then it dwindles away again. I may try to do another similar recording when the bird song is at its peak.

Anyway, back to the soils. G had to calculate water content, air content and also to see how much sand, silt and clay was in each sample. For this you simply shake up a sample of the soil in water to which a generous squirt of washing up liquid has been added. You then leave the jar to settle for 2 days. This was the result... 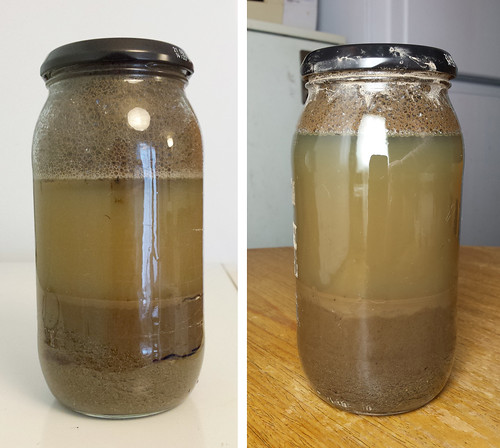 The sample on the left is from higher up the garden. The one on the right is from the lowest part that floods several times a year. The layers (from the bottom upwards) are: sand, silt, clay.

I was surprised at how sandy our soil is in the main part of the garden. I'd thought it was a clay soil. It's also interesting how the left sample has a clear division between sand and silt, with just a thin layer of clay on the top whilst the sample on the right has sand at the bottom and silt on top, but the dividing line between the two is difficult to determine.

So that was what I learned yesterday. Today I learned how to import a sound file made on my phone into Audacity (it needed an extra file I had to download from the web) and also how to make a simple video from a still photo and a sound file. One has to keep the brain active as one gets older. :)
Collapse