I’m experimenting with some new journaling software. The recent LJ kerfuflle, just the latest in a long string of exoduses has led me to think about what I want from a journal and how best to achieve it.

I don’t seem to have been posting much recently, despite doing more things and going to more places. Partly it’s because by the time I’ve processed the photos, caught up with all the stuff I neglected and thought about writing a “proper” entry, we’ve done something else, which has produced more photos and more experiences to journal. Also, now I’m having more days out and trips away from home, some of it is a bit repetitive for people other than me to read, especially if the weather is a bit blah and I don’t take any decent photos. However, I do like to record stuff for me to look back on.

One possibility would be to just make private entries on LJ, but my philosophy has always been that if you don’t want the world to see something, don’t put it on the internet! My LJ has always been public and the only times I have made something private is because it’s just too boring for friends to see or it related to work and, even though I never named names, I wanted the extra layer of security.

After some thought, I realised that I basically wanted a private version of an LJ-like journal that would run offline on my computer. I had already rejected an old fashioned pen and paper journal because one thing I like to do occasionally with LJ is to look back at what I was doing 12 months, 2 years, 3 years ago, and therefore I wanted a calendar function. This ruled out the obvious solution of just using a Word document. I also wanted it searchable and having it on the computer means that entries worth posting to LJ can be easily copied and pasted into Semagic, given a light edit and then posted without having to type it all up. Besides, I type faster than I write.

So yesterday I did some googling...

Life Journal looked good and was quite a bit cheaper than the one I’ve actually gone with, but it looked too slick for my liking and the user interface was mostly black. I’m currently trying out The Journal 7 by DavidRM. It has what is probably now considered a slightly old-fashioned look, but it’s straightforward and functional and seems to do everything I want. There’s a lot of helpful information and articles on the website about how people have used The Journal for various things, including writing novels, so it looks like it might also replace the scrappy notebooks that I have lying around, full of story ideas that I then forget about!

I have 45 days to try The Journal for free, but after playing with it for less than an hour, I’m pretty sure I’ll be buying it, but I’ll probably post more as I start to work with it seriously.

Walking home from the Welsh conversation group on Wednesday, I spotted this cat being indecisive. 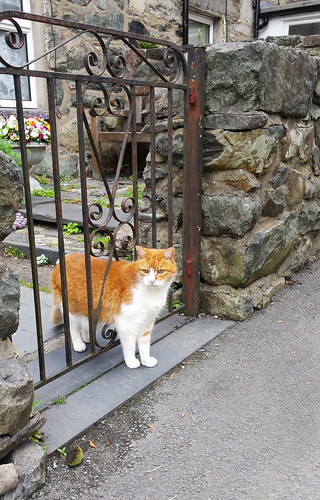 I've actually photographed this cat before about 3 years ago. 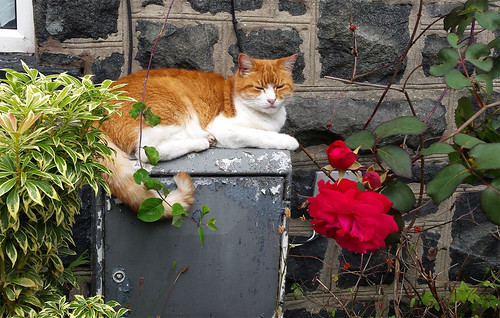 Yesterday we went on another reconnoitring trip for the geology book. We parked in the parking place for the Panorama Walk, but the spaces were mostly filled with minibuses from outdoor pursuits centres. There are some easy rock slabs nearby where they take kids to try their hand at abseiling and rock climbing.

We followed the steep lane up to the farmhouse at the end of the tarmac and then continued up a path, hoping to see traces of the manganese mines. The day was beautiful, with a clear blue sky and not too warm -- once we had finished climbing the steep hill, that is!

There was a glorious view to Fairbourne. You can see why the inhabitants are concerned about rising sea levels. They have been told that there won't be any extra sea defences built to protect their houses. 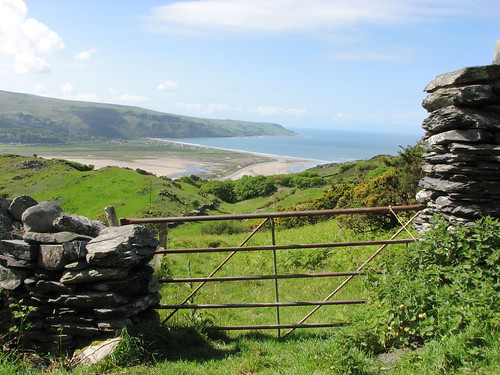 At the top, we were rewarded with some spectacular views of the estuary, even better than from the Panorama Walk. 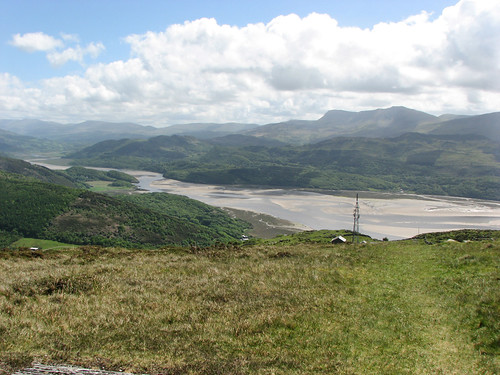 Gradually we made our way round in a circle and then back down to the steep narrow lane and thence to the car.

We had planned to eat lunch in the Last Inn in Barmouth, but as we passed, it looked absolutely seething. We had finished the walk rather earlier than expected, so we abandoned the idea of a cooked meal and instead drove to the seafront car park where we saw the air ambulance hovering. Fortunately I decided to park over by some other cars and not in the middle of the empty space, because once we had parked and climbed out of our vehicle, the helicopter proceeded to land in the car park!

It seemed to be a genuine emergency because while we were perusing the parking charges, an ambulance arrived.

Having decided that we weren’t paying £3.20 to park for an hour (it would have allowed up to a 4 hour stay, but we didn’t need that long), we drove on to the Co-op car park where we parked for free, bought sandwiches and proceeded to eat them on the beach.

I don't know what the paramedics were doing with their patient, but we'd finished our sandwiches and had a quick look at the little museum by the harbour before the helicopter took of, heading south across the bay.
Collapse