A couple of days ago we went out exploring again. On a previous trip we'd briefly looked at what G thought was a disused slate mine, only to discover that it was being worked. However, after perusing the map, he thought he'd found a route along public footpaths that would take us above the part they were working and give us a good view of the old mine.

It started off well. We parked by some cottages and then took a clearly marked footpath which climbed steeply past a field where someone was keeping ponies. The main track continued, but a stile over a wire fence reassured us that there was indeed a path through the woods. Quite a lot of the tall spindly conifers had been blown down at some point and the track was very faint, but we clambered over and under the fallen trees and eventually the path did bring us out high up on the hillside at the foot of the old workings.

I've never seen a slate wall as high as this one before! There was an entrance at the bottom, but we didn't venture to look in there. 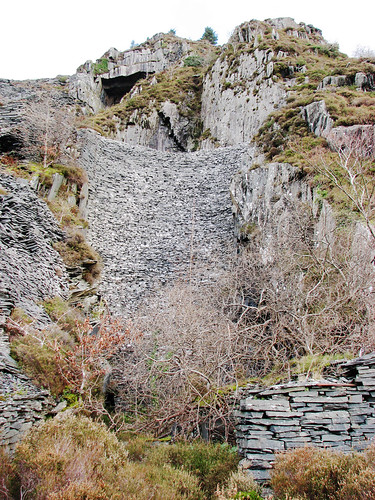 As I said, the mine is operating again on a small scale. They seem to be crushing up the slate waste to make that slate gravel stuff people use in gardens and also taking out the remaining good slate and making plaques, gravestones and other items.

Looking down the old incline at the current operations. 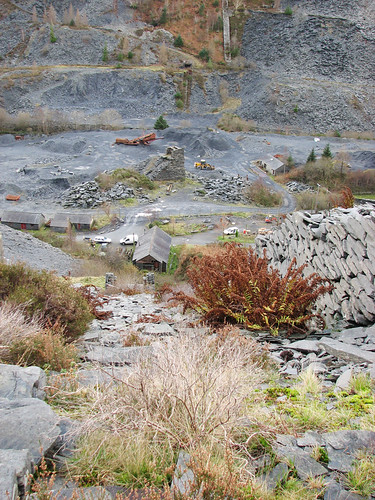 However were soon at the end of the path. 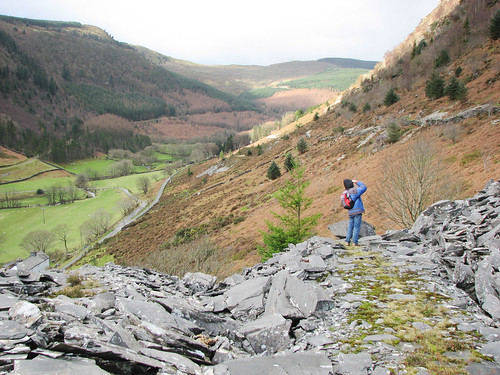 The map showed it continuing round the corner and across the face of the slate tip, but no path seemed to exist. We therefore scrambled up to the next level, which brought us to the top of that slate wall in the previous photo. 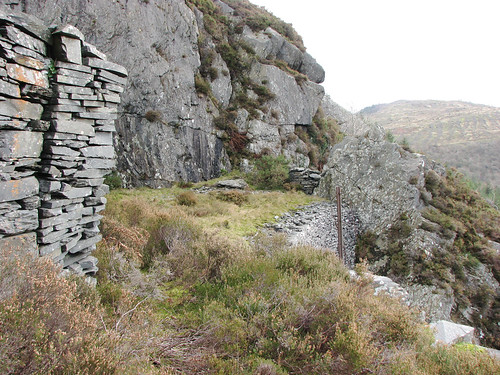 There was possibly a tram track running across this when the mine was working.

Unfortunately, there was still no sign of a path, but we'd reached that point where going on seemed a better option than climbing back down the slate tip we'd just climbed up.

After a rather precarious scramble, we did reach the safety of solid ground and then the path was easy and well marked, back down the other side of the valley to where we'd parked.

Here is the view of the old workings. If you follow the line across, you can see where there used to be a path across the waste tip, a path that has now disappeared due to the tip subsiding. 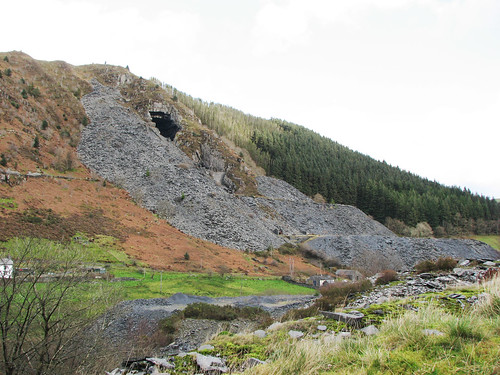 Anyway, it was quite an adventure, but not a route that we can put in the geology book! This will therefore be included as a site to explore rather than a circular walking route as we had hoped.
Collapse