This was a couple of weeks ago now. We actually went to stay in Cardiff but as one of G's days of meetings was cancelled -- after we'd booked the hotel and train tickets, of course! -- we decided on a day out to Bristol. I think I've only been once before about 40 years ago to visit my brother when he was still living there. However, G used to know Bristol well, having lived for some years in Bath. Anyway, as it was an easy day trip by train from Cardiff, we went to explore.

The docks had changed a lot since my husband was last here. He knew it as a semi-derelict area of old abandoned warehouses. The trumpet shaped structures on the bridge seem to be artistic counter weights for when the bridge lifts to let boats through. 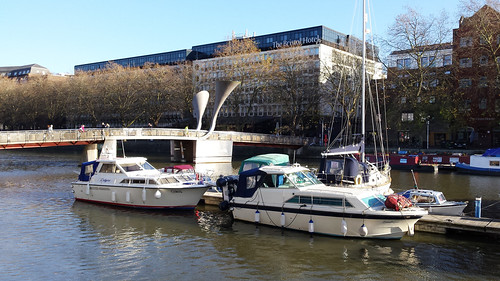 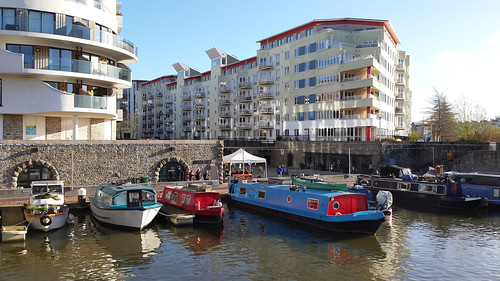 I've never seen the Clifton Suspension Bridge before, though I recognised it at once. I couldn't get the whole bridge in from this position and the light was wrong to shoot it from the other side. 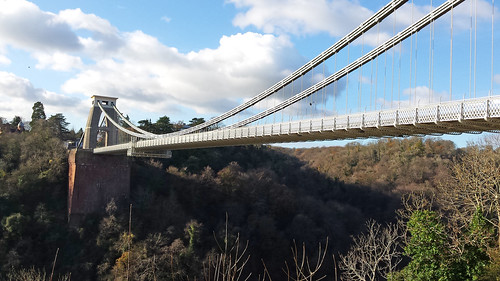 Clifton Gorge. This was the problem that the bridge designers had to solve. At high tide, the river is navigable so the bridge had to be built high up to allow sailing shops to pass underneath. The tide was out so it was rather muddy down there. 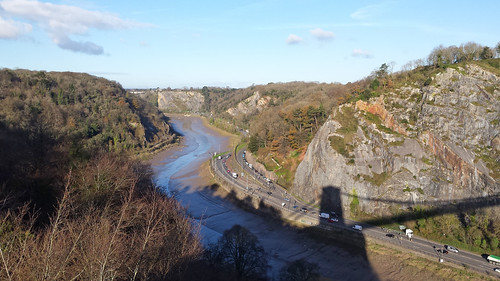 It's difficult to say exactly who designed the bridge because many people were involved in the process, including the famous British engineers and bridge builders Thomas Telford and Isembard Kingdom Brunel. Also a woman called Sarah Guppy patented designs for a suspension bridge across the gorge which she later gave to Brunel. Construction was a long drawn out affair. Though work began on 21 June 1831, the bridge was still not complete in 1859 when Brunel died. It was finally finished in 1864 and that was only after a significant redesign by William Henry Barlow and Sir John Hawkshaw and the use of the chains that had originally been used on the Hungerford Bridge across the Thames.
Collapse