For our second day exploring London, we opted for another stretch of the Regent's Canal. We've done parts of this before and last time finished somewhere around the Angel Islington. So that's where we started...

Walking along the canal is a great way to see a different side of London -- but watch out for joggers and cyclists! To be honest, I tend to feel that towpaths are not really wide enough for mixed cycling and walking traffic, but we avoided getting run over or accidentally pushing an eager jogger into the water.

There is lots to see on the canal. I found myself categorising boat names and came to the conclusion that there are three broad categories. There are people who have gone for what is traditional, or that they think sound traditional, like "Rosie Lee" or "China Rose" (boats are painted in the style of the traditional "roses and castles" decorations). There are those who have gone for the ageing hippy fantasy vibe with names like "Excalibur" or "Ygddrasil" (these feature lots of Celtic-style intertwined designs), and there are those who have gone for the "clever" name like "Narrow Escape" (fairly plain and without fancy decorations).

By the time we left Victoria Park we were feeling distinctly peckish, but the cafe in the park turned out to be packed full and also had a more elaborate menu than we wanted. It actually took us a complete circumambulation of the cafe to find the door and if someone hadn't emerged just at the right moment, we'd never have found our way in as the door was canvas and you had to unzip it.

Returning to the canal we continued towards the Thames... 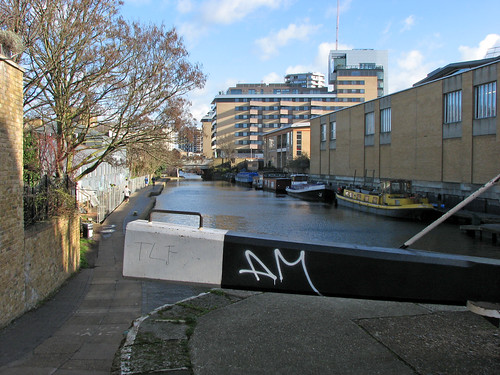 ...which we eventually reached via Limehouse Basin. From there we carried on along the by now familiar Thames Path to Canary Wharf. 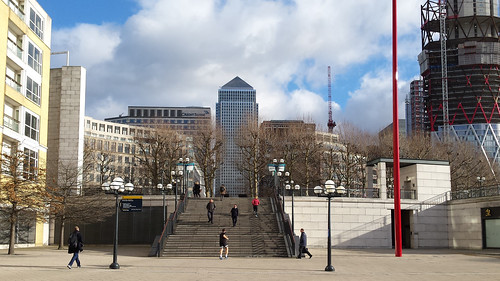 It was still peak lunch hour and the cafe that it looked like it might have a decent selection of sandwiches was full of men in suits grabbing a quick lunch away from their desks. There was another, quieter cafe, but we were back into posh food territory. According to the menu the cheese sandwich contained brie and another continental cheese in addition to Cheddar.

So we hopped on the DLR back into central London and got ourselves plebian baguettes in Waterloo station.

Note new icon! It says "I can't stand the rain" and was a graffito from the railway path walk. I think I'm going to be using it a lot this month unless the weather improves. :(
Collapse