I have been on many trips away from home this year. Somehow I never got round to writing most of them up, but I am becoming jaded with the fast moving yet often superficial contact on Facebook and Twitter, so I plan to spend more time on LJ again and that means input as well as reading.

On the Sunday G didn't have a meeting so we went on a day out together. First we went by train to Taffs Well and then walked to Castell Coch along the footpath and cycle way that ran alongside the busy main road for a while. We soon reached the village of Tongwynlais and climbed and sweated up the steep hill to the castle. 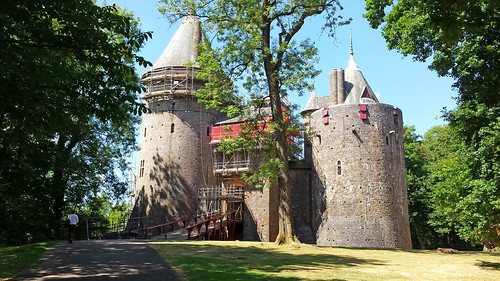 Unfortunately the castle was closed for renovations. I will have to return another time to see the interior which, according to the website, it worth seeing.

"The ‘eccentric genius’ William Burges was given free rein by his paymaster, John Patrick Crichton-Stuart, the 3rd marquess of Bute, to create a rural retreat to complement the opulence of his main residence, Cardiff Castle. He didn’t hold back. Dazzling ceilings, over-the-top furnishings and furniture were liberally applied."

Castell Coch is a "fake" castle in that it was only built in the 19th-century during the Gothic Revival. There were some Norman ruins on the site but I think what you see is entirely a result of the Victorian imagination. As we couldn't go inside, we briefly explored the lovely shady woods before heading back to Taffs Well or Ffynnon Taf as it is called in Welsh. 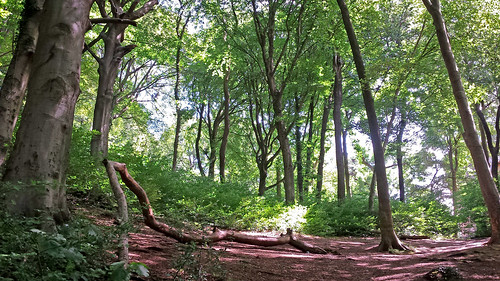 As we were now hungry, we explored Ffynnon Taf in search of a shop selling sandwiches. We also wanted to find the well that gave the town its name. We soon found a Co-op and then found the park with a bench in the shade of a tree where we could sit and eat. Not much further on we found the hot spring.

Now the hot spring was a complete surprise and we hadn't been aware of its existence until we stepped off the train and saw a sign on the station platform. I'm glad the sign was there because otherwise we would have missed seeing Wales's only hot spring. Britain doesn't have many hot springs and Wales only has only the one. Here it is, in a specially built building. 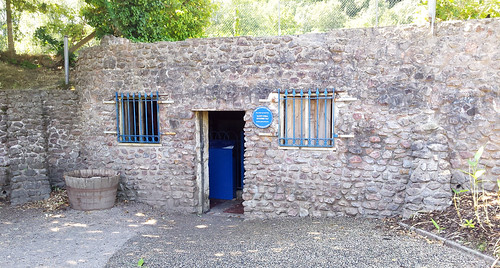 Apparently the water bubbling up in the warm pool in the dark interior has spent 5000 years filtering its way down through the mountain before eventually re-emerging.
Collapse