This year we've been doing so many day trips out to places that G wants to feature in his book that I just haven't kept up with writing them up for LiveJournal.

There were a few parking spaces down at the end of the lake not far from Craig yr Undeb (Union Rock), so after leaving the car, we investigated that first. It has it's place in Welsh history due to it being the place where the first slate miners' union held their meetings. All the photos of the rock show the view from the road (now a walking and cycling trail), but we climbed up to investigate the rocks and discovered that there is a natural lecture theatre, hidden from passersby.

This is looking inland... 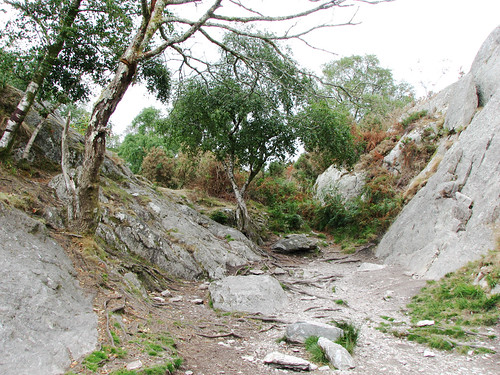 ...this is looking back to the lake. 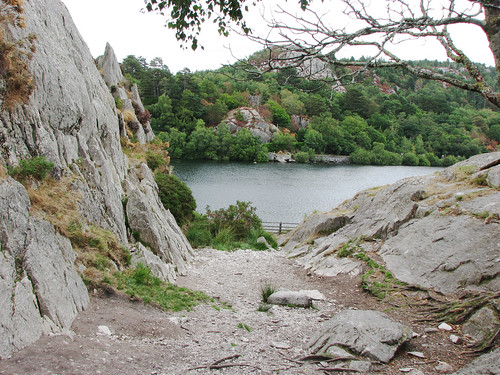 If anyone is interested in the history, here's a link...

Very briefly, tired of being exploited by the wealthy quarry owners, the slate miners of the Llanberis area wanted to form a union. In the early 1870’s 110 quarrymen from the Glyn Rhonwy quarry (one of the smaller quarries) declared themselves to be union members and were promptly locked out by the quarry owner. He soon had to give in, due to the financial losses and they were reinstated.

Alarmed by the new militancy amongst their workers, the quarry owners attempted to stop the spread of the trade unions by refusing permission for any meetings within the quarries or on any of the extensive lands belonging to the quarry owners.

However, for some unknown reason, Lord Newborough, owner of the Glynllifon estate west of Caernarfon owned some land near Llanberis on the shores of Llyn Padarn. He allowed the men to use the rocky outcrop which became known as Craig Yr Undeb (Union Rock) to plan secretly the formation of a trade union. It's a mystery as to why one rich landowner would support the slate miners, but Glyllifon is an agricultural estate with no mining interests and perhaps he'd taken a dislike to the quarry owners for some reason? Anyway, it was these secret meetings led to the creation of the North Wales Quarrymen’s Union.

After exploring the rock, we set off to walk to the other end of the lake, taking a high level path over the hilltops, looking at various outcrops on the way. We eventually descended through woods to reach the Old Mortuary and the quarry hospital. We didn't visit the hospital (open to the public free of charge as part of the Llanberis Slate Museum) because we'd already visited earlier in the year. We did, however, stop for a while in the cafe for a sandwich and cuppa.

We returned to the car along the other shore of the lake, past holiday makers sailing, paddle boarding, kayaking and even swimming. The footpath on the town side of the lake was once an old railway and so you get to walk through an old railway tunnel, something you don't often get the chance to do.

I have felt rather tearful all day due to reading the sad news that an online friend had died unexpectedly on Saturday. This was the message posted last night by her family:

"Hello this is from Penny's family. It is with a heavy heart that we have to tell you that our beloved mum suddenly passed away Saturday morning. She was much loved as a wife, a mum and a Nanna and her parting will leave a big hole in a lot of lives, we all loved her so much and will never forget you mum. xx

We ask at this time for some time for us to grieve,we will post funeral details when we know them as we know she had many friends on here."

aellia) face-to-face, but knew her online for 14-15 years, at first here on LJ and then on Facebook. In some ways we did not appear to have all that much in common, but I loved reading her posts with photos and snippets of her life with her growing grandkids. She wrote engagingly about simple things and her poems were never twee or sentimental and often contained a hint of melancholy.

One thing I always admired about her was the she had cultivated a particular style of dress that suited her perfectly and she regularly posted about bargains she'd found in the local shops. The same went for her garden. She could take inexpensive garden ornaments that, by rights, should have looked tacky and yet the way she combined them with her plants really worked to create a quirky haven of peace.

I will miss her posts about baking, and her grandkids growing. I'll miss the photos of her lovely lurcher.

I know there is at least one person here on LJ who counted her as a friend and who won't have seen the sad news on Facebook, so that's one reason I'm writing this post. The other is just to pay tribute to someone who will be sadly missed by both her family and friends.
Collapse