I don't know whether to rage at the Tories or whether to just sink into despair. Cancelling the vote on the Withdrawal Agreement was a cowardly thing to do. Parliament was packed. MPs had obviously given it top priority -- and then it wasn't to happen.

Not only that, many demonstrators had booked train tickets and hotels to protest outside. Some events were cancelled, but the stalwarts went ahead and protested anyway.

Meanwhile, in Northern Ireland, apparently, they are discussing reunification in phone ins on the radio, the Scots are agitating for IndyRef2 and here in Wales we now have two new parties who will campaign for Welsh independence. It looks increasingly likely that Cameron's attempt to unite the Tory party will end up breaking up the UK. If Brexit happens, the breakup will be quite quick. If we can stop Brexit, I think it will still happen, though more slowly.

Last week there was more going on than usual. Monday and Friday afternoons were spent collecting soil samples from cold muddy fields. An old acquaintance from my Pony Club days had asked for G's help into looking into how he could stop the RSPB's attempts to create a peat bog on their nearby land from making his fields too wet to use.

It did enable me to get a photo for the weekly theme, which was W is for Windy. The reeds were tossing wildly in the wind. 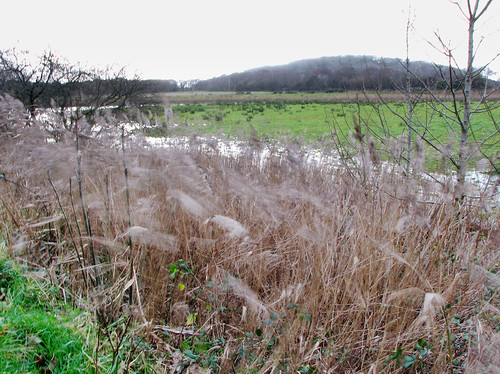 Monday afternoon was spent extracting soil samples with the soil auger. It is rather disconcerting to see the soil auger (a thing like a giant corkscrew), plunge down into the ground right up to the handle once it had been screwed down through the top layer of more solid soil. You can also feel the land bounce like a water bed when you're on a true bog!

The fields did display varying degrees of bogginess and G is busy writing up a report. It was sort of fun. It didn't quite rain and there were moments of sunshine. This photo was neither my acquaintance's field nor the RSPB potential bog, but we took a soil sample there for comparison. It revealed that the farmer had been working on improving the land as it was less acid than either the RSPB land or acquaintance's land. 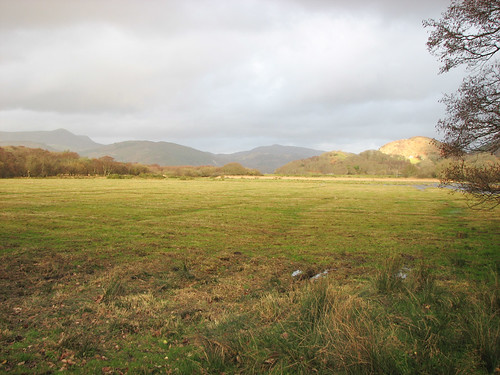 The combination of rain and sun did produce a rainbow. Interestingly, looking at my Flickr photostream, most of my rainbow photos have been taken in November. I always think of the spring as being the time for rainbows, but it seems not.

OK, this one is actually early December, but it's early winter anyway. 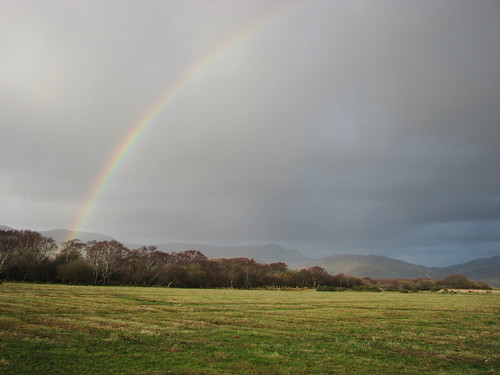 As well as collecting soil samples (and getting chilblains because wellies are not as warm as hiking boots), there was also the Christmas lunch on the Thursday. This was the Welsh class/Welsh conversation group's lunch and we had it in the training restaurant at the local college where G and I used to teach. The food was, as always, excellent and though the service is a little slow, time to digest one course before getting the next was quite welcome. Besides, you really can't complain at £17 for a four course meal.

I had the traditional Christmas turkey dinner. G doesn't like turkey, so we always have beef or pork, but there was plenty of choice and everyone said their food was good.

Then on Saturday I met our daughter and granddaughter in Aberystwyth. It was a cold and rainy day, but we dodged from shop to shop and it stopped raining long enough to walk along the prom after lunch. We ate at the new Byrgyr (Welsh for "Burger") restaurant. They do posh burgers which are very nice indeed.
Collapse