During our working life, we have more than once turned G's hobby into our job. What had once been fun suddenly became pressured and turned into hard work, so I find this article a refreshing change from the usual, "Follow your dream," advice.

Adam J. Kurtz, author of Things Are What You Make of Them has rewritten the maxim for modern creatives:

"Do what you love and you’ll never work a day in your life work super fucking hard all the time with no separation or any boundaries and also take everything extremely personally."

More recently, when I was made redundant, I did take some steps towards trying to sell the things I crocheted, but people won't pay a realistic price and so even a huge amount of work doesn't generate an adequate income. I now just crochet and knit for myself and occasionally make gifts if I'm sure they'll be appreciated.

Even more recently, after decades of dreaming of being a professional writer, I decided to write fiction just for fun. When I was in my 30s, I fell into the trap of feeling that payment for stories was validation and also believed the old quote from Samuel Johnson, "No man but a blockhead ever wrote except for money." I wasted many many hours polishing stories for submission when I'd have had more enjoyment out of writing the next one. Basically I turned what had been a hobby when I was a teenager into hard work and never ended up making more than a few pounds from it.

This week's theme was: H is for Hygge

The warm and cozy lifestyle that hygge promotes has been a key part of Danish culture since the early 1800s when the word first appeared in the written language (it's derived from a Norwegian word for "well-being").

You don't need anything special to make your life more hyggelig (hygge-like), it's more of an attitude of mind.

Just take a little time out, put down the phone and chill out with a hot drink, a comforting snack and a book.

The craze for hygge may have now passed to be replaced by konmari minimalism, but you don't need anything special to make things hyggelig. 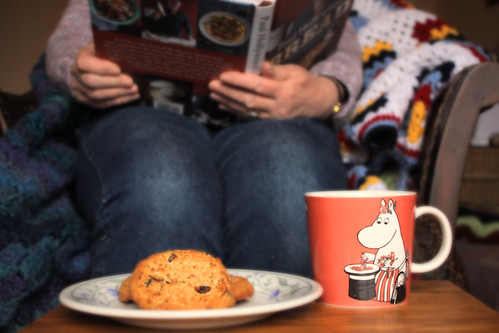 I am quarter of the way through my Welsh learning goal and I am on target for numbers of hours spent doing something useful to improve either speaking, listening, reading or writing. So that long-term project is still progressing well. One aspect, making videos in Welsh and putting them on a YouTube channel is progressing extremely slowly, so I've decided to make a separate long-term goal for it.

New long-term goal
1) By the end of 2019, I will have posted 12 videos in Welsh to my YouTube channel. I have two strands to this project. Some videos will be about travelling on the railways of Wales, both the preserved steam railways but also the normal mainline trains. The other strand will be about visiting an interesting place, going for a walk around it and explaining what there is to see.The videos will be aimed mainly at people learning Welsh, especially those that don't live in Wales and who would like to see more of the things that don't make it onto TV documentaries and travel programmes. (This is a SMART goal because it will be easy to see whether I've achieved it or not and I've set a deadline for achieving it. It should also be achievable and realistic as it's only 1 short video per month.)

2) Understand the obstacles: Taking the video is OK, but I need to practise speaking direct to camera. Editing is slow, but should speed up now I'm more familiar with the software.

3) Being positive: I need to become more confident when taking videos. I feel shy and embarrassed trying to talk to the camera and I haven't yet tried interviewing anyone, though that would add interest to the video. I need to think of myself as someone who successfully makes videos so if anyone asks what I'm doing, I can answer confidently.

4) Stay on Task and Show the world you can do it: I will set up reminders in my diary for the 1/4, 1/2 and 3/4 milestones so I can check that I'm on target. If I find the posting schedule is slipping, I'll reassess my goal and also look into ways of speeding up the video making process. I think my LiveJournal and (possibly) Facebook will be the best places to reflect on my progress so I have a record of what went well and what didn't go so well. I'll also post updates in here. Making my goals public helps with accountability. I've declared I'm doing this, if no videos appear, I'll have to explain why!

(This update is based on a challenge I run in Habitica in the Long-Term Goal Accountability Guild. The idea is that by stating your goal clearly and publicly, you are more likely to stick with it. There will be occasional updates here and links to the videos (which will have subtitles in English) when they're uploaded.)
Collapse