We're off to Cardiff again tomorrow and I haven't posted about last week's trip. The reason for two trips so close together is because G has a small part-time job as the principle examiner of an examination board with head offices in Cardiff. Most of the time the job involves very little, but at this time of year he's busy with exam marking and also there are meetings for moderation. Once these are over the job will go quiet until the autumn when they write the new papers for the following year's exams.

Anyway, G had one day of meetings last week, but we added a couple of extra days so he could visit a couple of places of interest.

The first place we visited was St Fagans National History Museum (currently shortlisted for the Art Fund Museum of the Year award). This is situated a few miles outside Cardiff in the village of St Fagans, so we had to get a bus there. Unfortunately the bus station was demolished during the redevelopment of the area near the railway station and at the moment bus stops are scattered around the centre, making it very hard to find the bus you need. We went up and down the street the number 320 bus was supposed to depart from, without finding the right bus stop. But then we stumbled on the little bus (less frequent) that goes right to the museum. So that was all right.

Here are some views of the castle and museum.

As you can see, it's not a normal museum. It is a collection of buildings rescued from various locations in Wales. The weather wasn't too good on the day we visited, so I didn't take many photos. 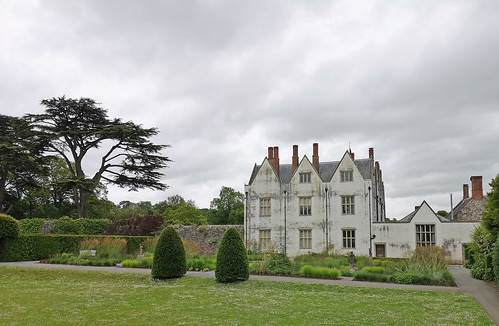 This time we did manage to get to look inside the castle. I've been to St Fagans three times before, but the castle is at the furthest point from the entrance. Once it was closed, I think there was a special event on. Last time, last summer, it was pouring with rain and the grandchildren were tired, so we only got to the lake. But we did get to look around this time.( Collapse )
This is more genuine in that when they dismantled the old church to move it to South Wales, they found traces of wall paintings. Here's the church interior... 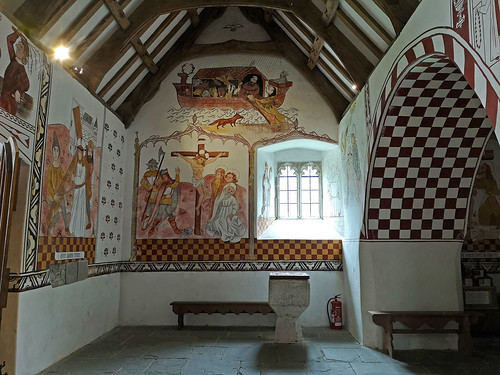 And here is the exterior... 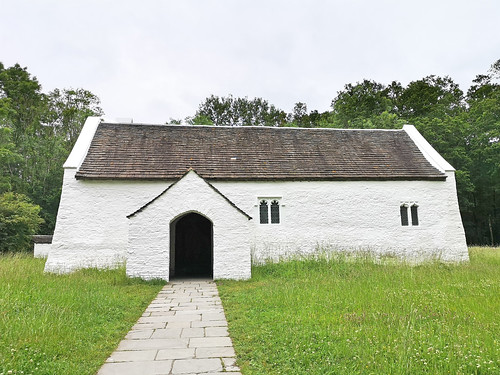 Here's a link to another photo I took of the same church when I visited in 2010.

I still haven't seen everything. There are displays indoors in the modern building near the entrance, but G wasn't interested so I may go back on Friday to see the textiles and other things.

So on the Wednesday, G was in meetings and I wandered all over Bute Park, Pontcanna Fields and as far as Llandaff fields and also met our son for lunch. I also shot some video which I have started to edit for my YouTube channel, but I'll have to finish it when I get back.

I was pleased that the new lapel mike worked well, complete with little furry cover to cut down wind noise. Downsides, I messed up a few shots because I was switching the video off when I thought I was switching it on. The virtual on/off button on the video app on the phone is not as clear as it might be. Also the selfie stick broke. The bit that holds the phone wasn't really big enough and it was stretched to its fullest extent. However, I do have the small bendy tripod (a cheaper version of a Gorilla Pod) which will probably be better. Making videos is still something of an experiment.

Anyway, onwards to the Thursday...

I used to glimpse Castell Coch from the A470 (the main N-S road) whenever I took our daughter (and then later our son) down to university in Cardiff. But at the time, I never got to visit. We did get there last year, only to find it closed for maintenance -- I know, we should have checked the web site! But we did admire it from the outside and also explored the grounds.

This time the scaffolding had gone and we got to look around inside using the Cadw memberships that our daughter bought us for Christmas. 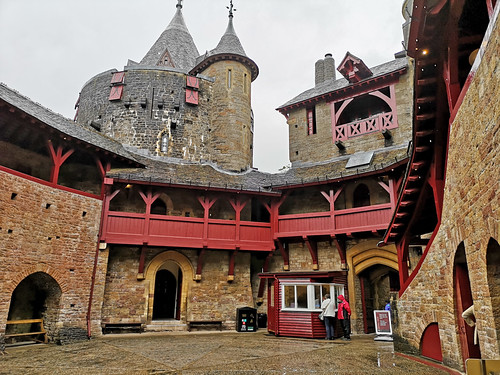 It is an extremely rich Victorian's idea of what a medieval castle looked like. To be fair, the third Marquess of Bute and his architect William Burges did research as best they could and reconstructed the castle that had once been a 13th-century castle used as a hunting lodge by the ruthless Marcher lord Gilbert de Clare.

There were audio guides available, which were very informative. We opted for the Welsh version and I'm pleased to say that I understood almost 100%.

And so tomorrow we're off to Cardiff again, but this is more of a flying visit. If our daughter isn't free to meet up for a chat, I'll return to St Fagans to look around more slowly on my own while G is in his meetings.
Collapse