One week ago I was in Ireland. It seems like aeons ago now, so I must quickly blog my visit to the Dublin Worldcon before I forget all the details.

I had planned the trip meticulously. The hotel was booked via the convention's website, but I had to sort out how to get there. The first decision was whether to fly or get the ferry. I've been to Ireland twice before. The first time was as a student on a geology field trip and we travelled by ferry, the second time was for the Octocon SF convention held each autumn, and that time I flew.

After weighing the pros and cons, I decided on the ferry, but that still left the decision as to how to get to Holyhead. I could drive, but then the car would be parked for a week which would a) cost money and b) mean that G had no transport. He doesn't really drive nowadays and wasn't likely to need to go anywhere that required driving, but it still seemed silly to leave the car sitting in a car park for a week.

So that meant public transport. ( Collapse )

First glimpse of Ireland from the ferry. 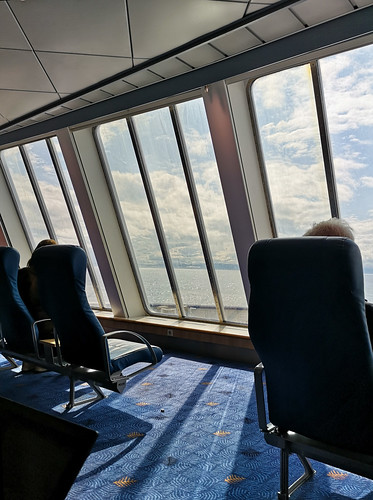 There must have been quite a few people on the ferry travelling to Worldcon. As everyone was standing up, preparing to disembark, I noticed that the chap who had been sitting next to me was wearing a Worldcon t-shirt. And then a woman who had been sitting somewhere behind came up and spoke to him, so I admitted that I was travelling to the convention too. It then turned out that the woman was staying in the same hotel as me and so we travelled on the bus to the city centre together and then successfully found where we were staying, which was a short walk from where the bus had dropped us.
Collapse