We used to stay in Merthyr Tydfil a couple of times a year when G was still teaching. The college where he worked ran a part-time B.Ed. degree under the auspices of the university in Newport and there were always several Saturday meetings held on the old campus in Caerleon. This was too far for a day trip, so the Travelodge in Merthyr Tydfil became a good place to stay overnight on the Friday. It was nearer than going all the way to Caerleon after work and yet within easy reach of Caerleon for a morning meeting. But G hasn't taught on those courses for a while now, so there had been no recent visits to Merthyr.

However, last weekend we went down to take part in the third independence march organised by AOUB Cymru (All Under One Banner Cymru/Wales). We decided to make a leisurely visit of it, so drove down on Friday afternoon and spent the night in the Travelodge. The hotel doesn't have a restaurant, but there are quite a few places to eat on the same site. Nothing fancy, but Frankie & Bennies do a decent pizza, so that was Friday dinner, followed by their sorbet.

The march was due to start at midday, so we had a little time to amuse ourselves before going to the assembly point. This is an old Victorian fountain. 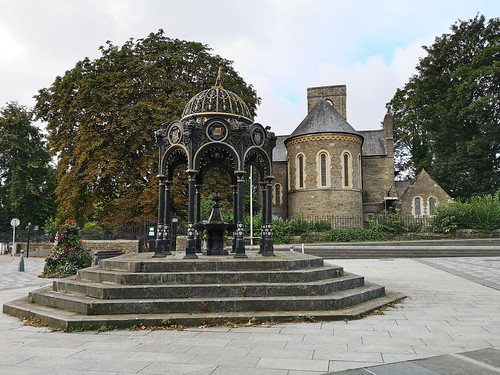 In past years, we just arrived in Merthyr lateish evening, stayed overnight and then left early the next morning, but just once we did arrive early enough to walk to Cyfarthfa Castle. Unfortunately it was less than 30 minutes before closing time and they weren't letting any more people in. We didn't have any better luck this time. It turns out that at the weekends the castle doesn't open until midday. That was when the march started and we didn't plan on hanging around until midday on the Sunday. So we still haven't managed to see inside the castle.

We did get to walk through the castle grounds though. There was a lot of activity, a car boot sale and the finish point of the Roman Run from Brecon to Merthyr Tydfil, a distance of just over 25 km. Though having said it was the finish, there was a bunch of runners who looked as though they were about to start. Perhaps there was a shorter Fun Run for those who didn't want to tackle the full distance? 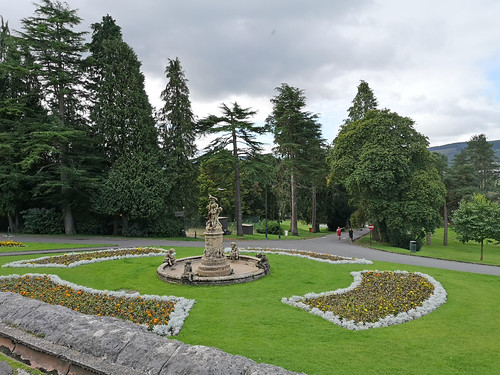 The family who owned the ironworks in Merthyr and who later had the castle built were the Crawshays. Richard Crawshay was born in Normanton in the West Riding of Yorkshire, but moved to London where he was apprenticed in a bar iron warehouse. He must have successfully worked his way up through the business because eventually he owned the Cyfarthfa ironworks in partnership with two other men.

The castle was designed in 1824 for William Crawshay II (Richard's grandson) by the architect Robert Lugar After the death of William and his wife, the castle was eventually sold in 1908 to the local council. They decided to use part of the ground floor for a museum, which still operates, while the rest of the building became a secondary school. The school went through some name changes, but still exists, though it moved to another site in 1981. 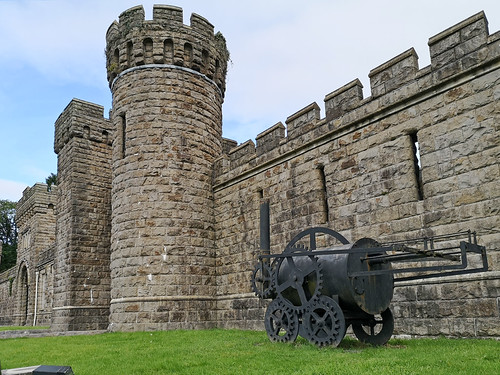 At one time Merthyr Tydfil was a prosperous town and there are several splendid buildings that still survive. This was the former YMCA and I hope it can be restored and repurposed rather than just demolished. ( Collapse )
Collapse