This week's theme was: N is for Nuisance

An unexpected sunny day in town, but the steps and narrow pavements of a historic town are a real nuisance if your mobility is restricted. Even worse, the building in the picture is known as Tŷ Siamas. Many groups and organisations hold meetings and concerts in the hall about the shops, but currently the lift is broken and it will cost £6000 to repair it. I haven't yet heard what the plan is to raise the money. 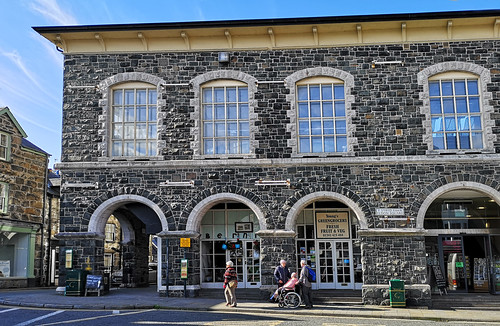 I was mentally exhausted yesterday by the time I'd sorted out the prices for the Daihatsu we were selling and the Yeti that we're buying and then gone into town and done the change of ownership and change of insurance. I therefore drove the new car straight home, a distance of less than quarter of a mile, and didn't take it any further. I used to be able to do so much more than that in a day but I don't have the stamina, either mentally or physically these days.

I had hoped that I could get used to it gradually over the next week or so, but we'd had an unexpected phone call from an old friend earlier in the week. They live in Scotland but are coming to North Wales for family reasons so wondered if we could meet up. Because G wanted to meet somewhere interesting, we agreed to meet in the Slate Museum in Llanberis on Saturday.

As I didn't want to go for a long drive without a bit of practising first, I took the Yeti for a drive to the coast this morning. I thought it would be a good test run. I'm pretty familiar with the road, the tourists have gone home so there's not so much traffic and there's a steep hill and tricky bends and, basically, if I survived that then I'd be able to do the one hour drive to Llanberis.

The drive was fine, apart from the time when I accidentally brushed a knob on the dashboard and switched the air conditioning on full blast. I had to pull over into a layby and work out how to switch if off again. Oh, and I've also now mastered opening the passenger doors (double press the key fob) and we successfully filled with with diesel. G came with me because he wanted to see how it went.

Still to learn: how to turn the lights and windscreen wipers on and off, how to switch on and adjust the heating, how to work the radio.

But we're getting there!

Here it is in the car park at the end of the spit in Fairbourne. 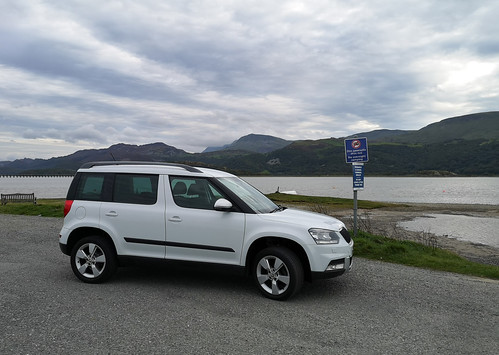