For the first time since I don't know when, I woke up this morning with ideas for the story I want to write during NaNoWriMo flitting around my head and not the latest Brexit ruminations.

I had obviously been stressing more than I realised about that 31st October deadline, but going on the huge march and Johnson's timescale for the "deal" being voted down seems to have relieved that stress enough to make me feel more positive and able to get on with stuff again.

It's supposed to pour down with rain all day, but I need to visit my elderly friend and then call in at the supermarket on my way back. Then I can spend the rest of the day warm and dry indoors while I start the editing on my next video and test one of G's computer programs that will be in the book he's writing.

I'm going to post a few more photos from our trip to London last week, but I'll work backwards and make the huge anti-Brexit march the grand finale.

I've already posted the photo of the canal lock near Camden because I used that for the Alphabet Photo of the Week (Q is for Quiet). It is actually surprising how many quiet places you can find in London. If you go to the major tourist attractions they're always heaving with people, but there are some very pleasant walks to be had if you know where to go.

Last Monday I had arranged to meet an old friend from our university days. J lives in Croydon, but we usually manage to see one another once or twice a year because she and her husband enjoy walking and cycling holidays in Wales and we like city breaks in London. But for various reasons, I hadn't seen J for about 18 months. Anyway, we arranged to meet at Kings Cross, outside the Harry Potter shop, and then walk along the Regents Canal.

We like staying in the Adagio aparthotel which is 10-15 minutes walk from Kew Bridge station. The old tower is at the London Museum of Water and Steam on the wonderfully named Green Dragon Lane. We haven't visited the museum yet because it's not free and unless they have the steam engines running, it doesn't seem value for money. 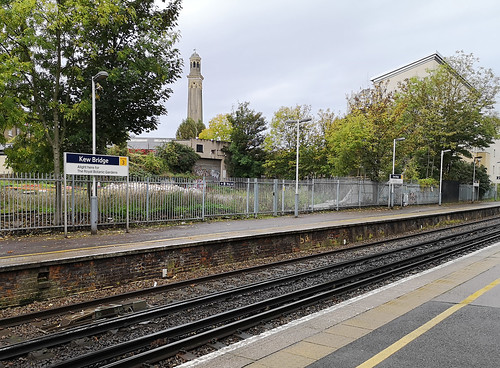 The train took us into Waterloo where we changed to the Tube and arrived at Kings Cross a few minutes early to find a seething crowd outside the Harry Potter Shop and J waiting nearby.

The three of us had a quick chat, but G isn't one for sitting around catching up on what we've been doing, so he bought a Cornish pasty from a stall on the station and set off on a long walk down the canal towards the Thames. J and I went upstairs to the cafe and had a cup of tea while we waited for the rain to ease off.

This is the newly opened shopping centre near Kings Cross station. It was very quiet, but that might just have been because it was a wet Monday morning, but the shops were very expensive. Last time we came this way, it was still a building site. Coal Drops Yard was once, as its name suggests, a huge coal yard for the nearby gasworks. Just a little further down the canal there are some old gasholders that have been turned into apartments. (A photo I took two years ago.) 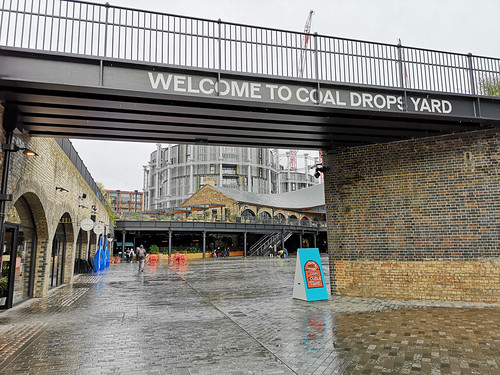 The rain had more or less stopped by now, so we ambled along the canal towpath, chatting as we went, and soon reached Camden. Camden was crowded with tourists and we're not into standing around eating street food, however tasty it is, so we briefly left the canal and Camden Lock and went in the Pret a Manger on the High Street for another cup of tea and a sandwich.

Suitably refreshed, we set off along the canal again, only to realise we were going the wrong way and had to retrace our steps! Once heading in the right direction again, we ambled and chatted all the way along past London Zoo and eventually reached Little Venice which is a small canal basin with many moored houseboats.

We'd been in the cafe in the narrowboat some years ago, so we stopped there for a final drink (lemonade for me this time as I fancied something cold). Then it was just a case of finding the Warwick Avenue Tube station and the Bakerloo line took me right back to Waterloo and thence back to Kew Bridge on the train.

If Corbyn pushes for Lexit, he will be making the same mistake that the mythical Arthur made. Here's why.

In the Mabinogion, Bendigeidfran (Bran the Blessed) is mortally wounded and asks his seven surviving men to cut off his head and take it to London and bury it on the site where it is said that the Tower of London now stands. While the head remained buried, no misfortune came to the island of Britain, but Arthur thought he could defend Britain by his own might and so he dug it up. But he was overconfident and, as we know, he lost at Camlan and that ushered in the Dark Ages.

Corbyn wants socialism in one country and thinks that being in the EU will stop him doing that, hence Lexit. Leaving aside the fact that the voters of the UK are unlikely to vote for a very left-wing government in sufficient numbers to win outright, this plan assumes that Labour will keep on winning forever and thus we will keep our little socialist utopia. Nice though that might be in theory, over the past decades, the Tories have been in power more than Labour. The moment a Tory government got in, they could undo all Labour's legislation and there will be no EU minimum standards to fall back on. Lexit would not be permanent. We'd soon have the hardest of hard Brexits. Why can the Corbyn supporters not see this?

Article in the iNews saying that if Labour want to win an election, they should argue for a left-wing Brexit. I really don't agree because they will shed Remain voters who will turn to the LibDems.

I'm way behind on my long-term goal but steadily catching up. I missed the Monday Welsh class because I was away, but went to the cafe chat and despite my Australian friend's internet being down, we still managed a chat on Thursday but sound only rather than video chat. I'm hoping to catch up in November because I've booked for a day school and I'm also hoping to use the NaNoWriMo enthusiasm to have a go at writing story in Welsh.

No progress with Spanish.
Collapse