After spending the summer and early autumn existing mainly on repeats of Midsummer Murders and Poirot, suddenly three decent dramas have come along all at once.

Dublin Murders: New series, detectives hunt for the killer of a teenage girl who had been about to go to England to take up a place at ballet school. Connections to a crime that happened 15 years previously via both the detectives working on the case and the victims family. Interesting.

Giri / Haji: Bilingual Japanese/English drama with a Japanese detective who comes to the UK in search for his errant criminal brother who was supposed to be dead but now appears to be a hired killer in London. Intriguing with occasional flashes of dry humour.

When we watch TV drama we like to look out for places we have visited. Spiral is no good for that because apart from a brief trip to Paris in his teens, neither G nor I have been there. Usually it's G who manages the one-upmanship with claiming locations in places like San Francisco, but I'm winning with the Dublin Murders and could declare, "I've been on that train!" when the female detective caught a train going to Malahide.

The winner so far though is Giri / Haji because I'm 99.99% sure that the student accommodation that the Japanese detective is staying in is the LSE hall of residence in Tavistock Square where we have stayed quite a few times.

I have (perhaps rashly?) challenged myself to write a story this month.

Or at least part of a story.

There's no way I'm aiming for 50,000 words though which is a proper NaNo quota. The best I've ever done was around 35,000 for NaNo quite a few years ago now, but that was writing in English and I've challenged myself to write a story in Welsh.

As I've given up any ambitions of publication, I may as well use any creative urges to practise and improve my Welsh.

Word count today: No actual words but I've made more notes about the characters and theme. A plot is slowly forming and I hope to start getting actual words starting tomorrow.

This week's theme was: R is for Right

Turn right for the footpath alongside the river and the public toilets. 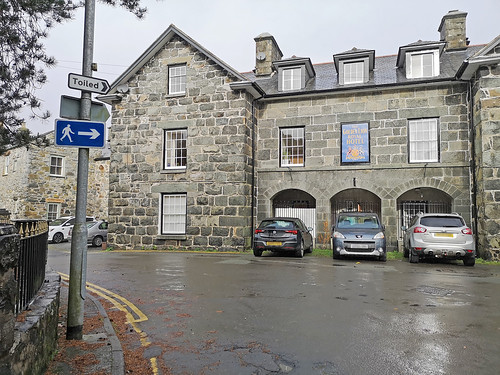 This is also the photo for Day 1 of my 30 day November photo challenge. in 2010 I did a 365 photography project and I'm planning to do another next year. As a warm up, I'm reviving my photo-a-day in the months that have 30 days challenge.
Collapse