I've photographed this bridge many times and I knew that the central part was symmetrical. I had to wait until today though to get some decent weather. 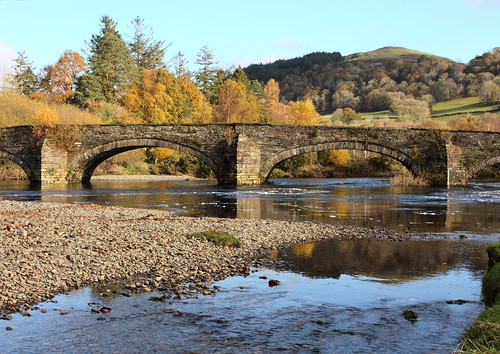 So the day started well. I normally drive to see my elderly friend on a Friday morning, but I took a small detour first to stop and photograph the bridge. I then spent time with M and her friend and helper S who cooks and cleans for her. S has adopted a Romanian dog and is eagerly awaiting its arrival.

I then drove to the Co-op and did a decent sized shop before returning home to discover that the central heating boiler had gone on strike and was refusing to come on. We had a routine service appointment arranged for next Tuesday, but G insisted that we checked it was definite and the website didn't show us as even having the Homecare cover.

So that meant phoning British Gas.

I was on hold for what seemed like hours, but was only actually 30-40 minutes, but when I did finally get through to a real person (a young sounding Scottish man) he was extremely helpful, confirmed that we did have a service appointment next Tuesday but that he would arrange for a repair man to come out to us on Sunday.

We won't freeze. We can take an electric heater down into the kitchen for when we're eating meals and the shower has it's own electric heater, so doesn't depend on the boiler.

We actually want a new boiler because we want to redo the kitchen, but we'll talk to the engineers and take things from there.
Collapse