10/30 for my photo-a-day in November challenge

Another desperation shot grabbed while doing a quick clean and tidy of the house in preparation for the gas engineer who is coming to look at our dead gas boiler. This is the view from just outside our front door. I'd just stepped outside to shake some mats when I saw how lovely the light was. 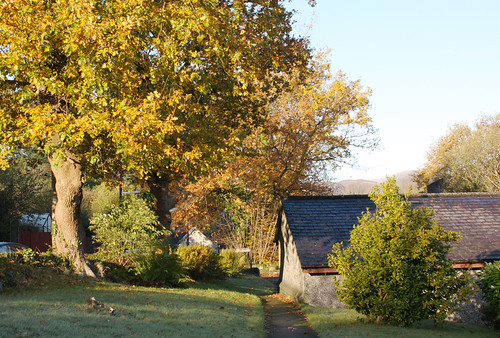 I finished as much cleaning as it was sensible to do around midday. We had an early lunch and I took the electric convector heater back up to my room so I could do stuff on the computer. The engineer phoned around 20 minutes ago to say he was on his way. I do hope he can mend the boiler so it will keep it going for another few weeks until we can arrange for a replacement. This one is now elderly and reaching the point where spare parts are no longer available. We want a new kitchen, but then realised it would be best to replace the boiler first and then fit the kitchen around it rather than discovering that the new boiler was not the same size and shape as the old one. We don't want a situation where brand new cupboards have to be removed in order to install a new boiler!
Collapse