11/30 for my photo-a-day in November challenge

I don't know what these berries are. It's a shrub that introduced itself in between the trees that grow by our front garden wall. But as it's attractive, we've let it stay.

I grabbed the shot as I was walking back from Welsh class this morning. I knew I had a lot to do this afternoon so I wouldn't have time to go out looking for anything more interesting. As it happens, the chap from British Gas who was supposed to come tomorrow has said he can come this afternoon as he's in the area. He's running late, but I hope he does come today as that will give me a completely free day tomorrow to make progress with things. 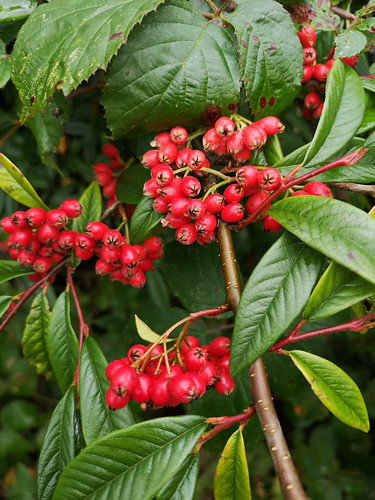 Half way through the afternoon, the phone rang. As per my previous post, I expected it to be the chap from British Gas saying he was about to arrive and possibly wanting directions to the house. But it was a man with an English accent claiming to be calling from our bank. He said that there had been a suspicious payment made from our account of £1000 to a Mr Singh.

I knew immediately it was a scam, so I asked him to prove that he was calling from the bank. He tried to bluff, saying he could give me the phone number of the head office, but I interrupted saying that I'd check my account online and if there was a suspicious payment, I would call the fraud help line myself. At which point he quickly hung up.

But it occurred to me that it might be fun to play with them a little. What if I'd replied, "Oh, no! That's fine. We've just bought a second hand car off Mr Singh." What would they say then?

If I'm in the mood, I like to keep scammers talking for a while if I can because if they're talking to me, they're not cheating anyone who is vulnerable, but this is the first time we've had this particular scam, so I hadn't thought out what to say and therefore went straight on the attack. I did try to get their number by calling 1471, but of course it had been withheld, so I can't report the scam attempt.
Collapse