I was awake at 6 a.m. and up promptly to finish emptying the bottom cupboards in the kitchen and clearing everything ready for the gas engineer to start work on installing the new combi boiler. The enthusiastic and efficient young man arrived some time later and set to work.

Interesting discovery: underneath the big built in kitchen cupboard, there is a large hole, with a sloping soil floor. Our house is built on a hill and thus has three levels. The level where you enter has just a small front hall and the bathroom, then you go up to the bedrooms or down to the kitchen and main living room. So the bathroom floor is suspended above this hole. Anyway, we now have plans for the hole when we have the kitchen re-done. It could be turned into a full height cupboard which would finally give me space to store the tall things like the sweeping brushes and vacuum cleaner.

By about 1.30 p.m. he had finished installing the new gas pipe from the meter to the corner of the kitchen and then had to leave for a dentist appointment. Not that he could have gone any further anyway because we are lacking an important item, namely the new boiler. It's supposed to arrive this afternoon. I have my fingers crossed it does arrive so the gas engineer can finish the job tomorrow. Otherwise we will be living in limbo with everything from the kitchen and bathroom in boxes and stashed around the rest of the house.

Here are the remaining photos from our trip to south Wales last weekend.

On the Saturday we caught the train from Merthyr down to Cardiff Bay and set off to walk across the barrage and right round, back to where we started. The circular walk is around 5.5 miles.

From the start of the barrage, looking across Cardiff Bay to the distant hotel. 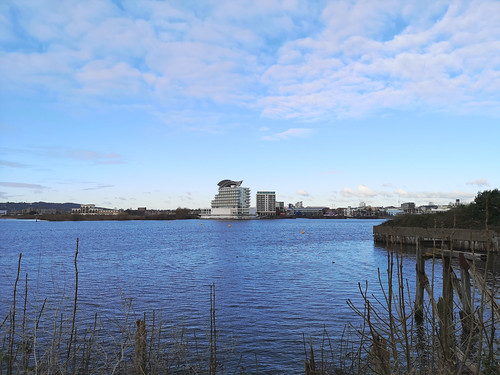 The barrage closed off the mouth of the Bay and now forms a popular walking and cycling route to and from Penarth. 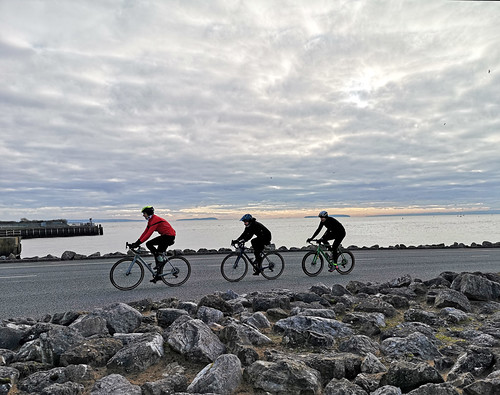 We did add a little more to the distance because we walked up to the viewpoint on the headland at Penarth, but the sun was in the wrong direction to take photos of Flatholm and Steepholm, the two islands in the Bristol Channel.

We had a gift voucher for a three course meal which we intended to use at the Zizzi in Mermaid Quay after our walk, but we arrived back a little early, so wandered round to the Pierhead. G hadn't been inside, so we popped in and watched a slide show of the history of Cardiff docks. Built in 1897 when the docks were very busy, it was originally the offices for the Cardiff Railway Company. 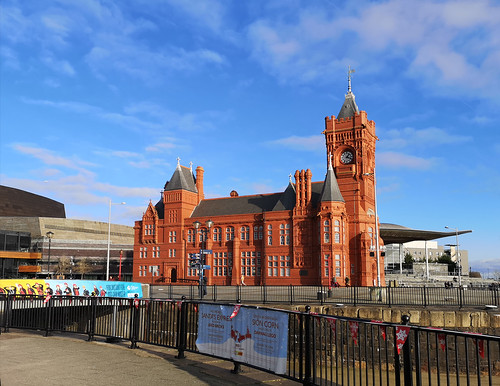 I've been to the Bay more often than G has because I used to meet our daughter there while he was in meetings. I've often seen the little pleasure boat Daffodil and it even features in the video I made in Cardiff Bay. It was about to leave while we were standing watching the boats and the boat owner called to ask if we wanted to do the trip around the bay. Somewhat to my surprise, G said yes, so we hurried on board. 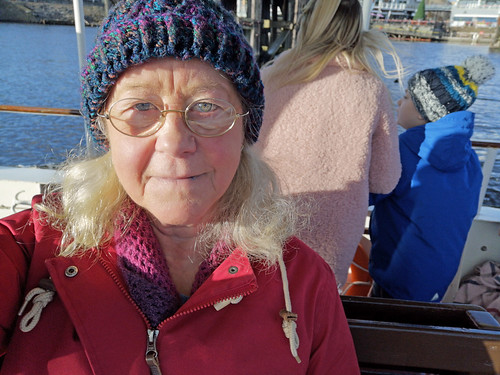 This photo is taken from Daffodil and shows the structures known as "dolphins". No one seems to know why they were called "dolphins", but back when the Bay was still tidal and boats would come in with cargo, they used to berth alongside the dolphins to stop them falling over when the tide went out because in those days the bay was just an area of mud at low tide. Since the barrage was built, the water stays in the Bay all the time, though now it's freshwater and not salt water. There is a lock to allow boats to leave the marina and go out to sea. 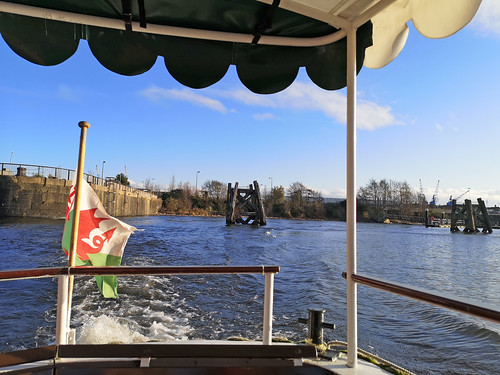