This morning I'm feeling much more cheerful than I expected on waking to a Tory landslide on a scale not seen since Thatcher won in the 80s. But it seems that the Brexit con job has convinced so many idiots that there now seems no chance of stopping it. I hope they enjoy what they voted for.

But of course they won't. It won't be long before the people who voted Tory to "Get Brexit done" in the hope of being able to turn on the news without it being dominated by Brexit will be sadly disappointed as the Brexit saga drags on and on and on and on while the country's economy nose-dives.

So things are going to have to get worse before they get better.

Meanwhile, the results here in Wales are much better than I expected. They were predicting that Plaid Cymru (The Party of Wales) would lose a seat, but they hung on to all four with an increased majority. The Tories have gained 4 seats from Labour in some strongly Leave voting areas, but I think the disillusion will soon set in and I also think that Plaid will find it easier to take seats from the Tories than from Labour. Plaid are a left-leaning party but without Labour's Marxist tendencies and all the seats they hold were Tory or Liberal before people turned to Plaid.

Looking at the results in England though things are very disappointing. Labour need to reinvent themselves sharpish or they are destined for the scrap heap of history. Their policy of fence sitting over Brexit has not helped them either; they lost votes in both leave and remain areas. What England desperately needs is a left-ish, socialist (of the modern European type) party. Scotland and Wales already have them and both SNP and Plaid Cymru did well, despite being anti-Brexit. Corbyn has said he will resign "before the next election". He needs to fall on his sword now if Labour are to have any chance at all of recovery. I think many young people would rather vote Green then Labour, if only our electoral system made that a sensible option.

This week's theme was: X is for XXL

One of the peculiarities about the little town where I live is the custom of building house walls with giant stones.

To be honest, I'm not really happy with this photo because it was taken with the phone on auto and it's upped the ISO because the day was so gloomy. Believe it or not this was 10.15 a.m. on Wednesday morning.

However, the weather has been vile this week and though it's better tomorrow, I'm not going to get the chance to wander round town because I have plans to take photos with my new camera in some woodland. So this will have to do. 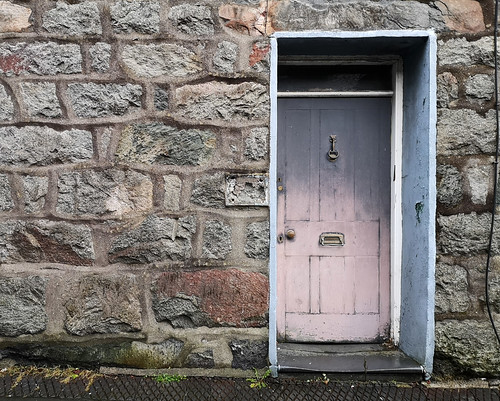