I have now taken 8 photos in 8 days. They are mostly just grabbed with the phone, but I'm hoping that when the days get a bit longer I'll manage to go out with the DSLR and do a bit of real photography.

As I said in a previous post, we asked for a selection of goodies from the children rather than things. We have eaten probably about half, but there are still some nice things left, including these chocolates. 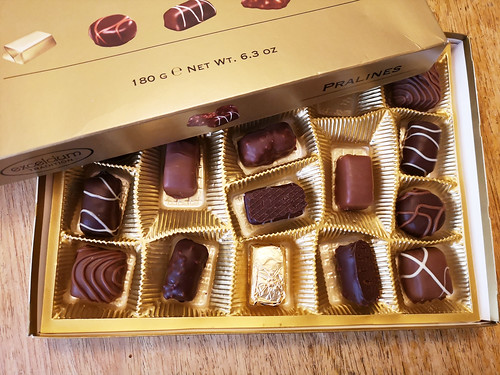 Things are starting to get back to normal this week. I went to the usual Wednesday Welsh chat this morning and there were 7 of us there. The other day G told me he'd heard someone talking on the bus about a local-ish person who was milking sheep, but when I asked M (who lives in the relevant local area) she hadn't heard of anyone. So this remains a mystery to be solved. However, a quick google reveals that there is a milking flock of sheep on the Lleyn Peninsula and cheese made from ewe's milk is produced in Bethesda. So it is a thing in Wales and possibly a growing trend.
Collapse