This week's theme was: F is for Force

I was racking my brains earlier this week, unable to think of a way of photographing the theme -- and then I realised the answer was literally staring at me from the bookcase in the hall! The bookcase is where toy Yoda normally lives. :) 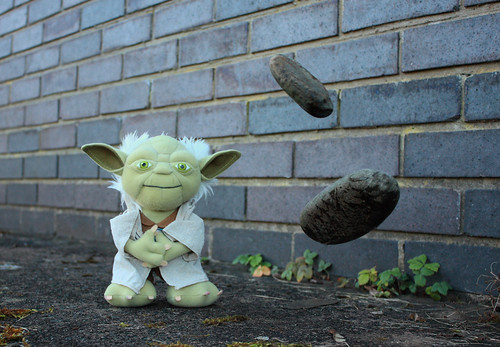 Yesterday I had the job of introducing the person who was running the activities for the special Merched y Wawr Welsh learners evening. My first attempt at public speaking in my second language went very well, as did the word game that R had invented for us to play in groups. There was lots of laughter, which is always a good sign. We also sang a couple of songs and lots of learners turned up.

This morning A didn't appear online for the Skype call. (I found their message of apology later.) But it was probably just as well because I'm concerned about the slowness of the desktop computer and I didn't have Skype on the laptop I've started using. I have installed Skype now and tried it out, so I now know that I have a way of Skyping if the desktop misbehaves in the future.

I then had to drive to meet the treasurer of the neighbouring Quaker meeting so we could examine one another's accounts. The cafe in the Corris craft centre was closed, but the little cafe in the Idris Stores was open and we ensconced ourselves in the corner with our paperwork and, as well as getting everything checked, we had a useful chat about treasuring.

These days, with so many villages losing their shops, it was a delight to find this one not only still open, but thriving.
Collapse