I have today cancelled my hotel booking for the Easter SF convention. It's perfectly possible that a holiday maker will bring the illness to my little Welsh town over Easter, but being cooped up in an airport hotel at the Birmingham NEC with people coming from all over to sit in crowded rooms listening to guest speakers and panels sounds like asking for trouble. We don't even fill the whole hotel and air crew and passengers from everywhere take up the spare rooms. I would be sharing the dining room and toilet facilities with more than a thousand people.

If I did go, I would feel obliged to self-isolate for at least a week afterwards in case I'd picked up the Covid-19 virus. I have a couple of elderly friends and though M at 97 is very philosophical about coming to the end of her life, I really do not want to be the person that gives her a potentially fatal illness.

In fact the convention may not even go ahead. Events are being cancelled, such as the London Book Fair that should have been this weekend, but rather than dither and fret and worry, I've made the decision not to go and I feel happier having done it. We do have two trips away booked over the next few months, but we've booked a cottage or apartment, so contact with other people will be minimised and no more than normal. I have no intention of becoming a hermit, but I do like to weigh up the risks and I just feel that a crowded hotel would be pushing my luck.

I felt really down yesterday, so much so that I didn't feel up to socialising in the Welsh chat group. Instead I decided to test and proof read some more of my husband's latest programming book. But I got in a total muddle and ended up in tears feeling stupid. When he returned from his walk and he tried to sort it out, it became clear that the book was confusing, but it had made me sad.

Anyway, still not up to talking to people, I messaged my Australian Welsh chat buddy to apologise, saying I was taking advantage of a rare fine day to go for a walk.

It was a good decision. The day was sunny and that, combined with a bit of strenuous exercise made me feel much better.

When you've lived in a place for 40 years, it's difficult to find a local walk you haven't done umpteen times before, but last year the Nannau Estate made a permissory path around a local hill called Foel Offrwm. It's a hill I'd never climbed until last year because the land is private and there are no public footpaths. Now, instead of scrambling up the steep heather clad hill and trying to find a route, there is a proper path. But I didn't go to the summit because there is now a circular walk that goes around the hill about half way up.

First you climb up from the car park. 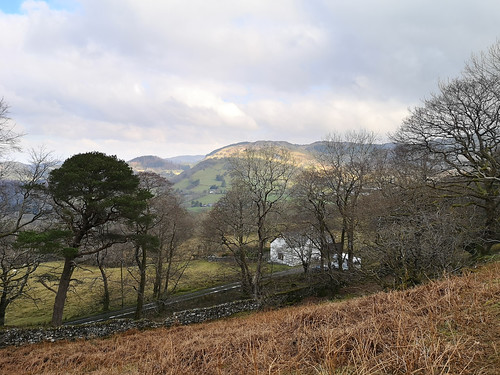 Here I'm wearing another of those headbands I mentioned in a recent post. 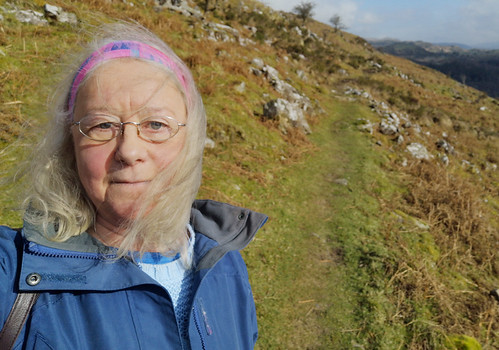 The track is nicely constructed and, considering the record breaking amount of rain we've had recently, not particularly muddy. 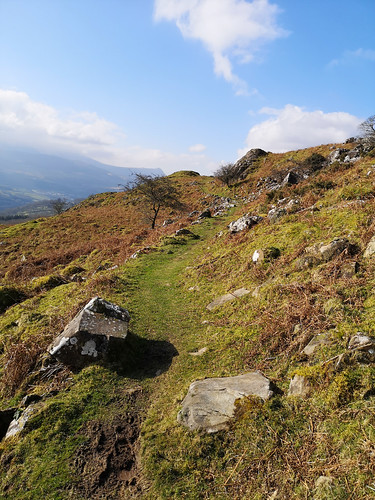 Nearly back, the big house in the distance is Nannau, the former home of the Vaughan family, one of the ancient noble families of Wales. Now, sadly, it's empty and deteriorating. 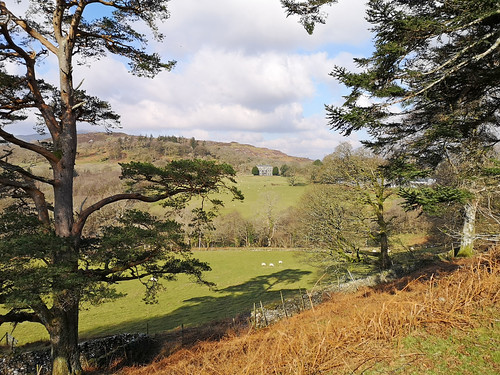