This time it's entirely my own fault. After not buying anything other than food for weeks, I went and ordered some things. What I want to do is go out for a nice long walk, but I feel obliged to stay at home in case one of the orders arrives.

What are the things?

I was starting to run out of vitamins and I felt that queuing outside the chemists in town to go into the rather cramped shop and then probably find that they were out of stock of at least some of the items I wanted was not a good idea. So I went online and ordered what I could from Boots. A couple of things were indeed out of stock, so I ordered them from Holland & Barratt. I'm also still waiting for the external drive I ordered from Amazon so I can have a duplicate backup of all my photos.

The external hard drive that I had permanently connected to the desktop computer has given up the ghost. I've had the desktop for at least 6 years and I'd had the external drive for a few years before that. I remember that the last changeover from one computer to another was made easier because everything was already backed up and could easily be copied to the new machine. These things don't last forever, so the fact that it's died isn't surprising and it's not the only backup I have, but it needed replacing.

So I'm feeling fretful and I can't do the thing that would make me feel better.

In more cheerful news, the miniature roses that were a birthday present two years ago are flowering again -- which means I've managed to keep them alive! And the peas I planted have sprouted and are growing well and smell delightfully of peas.

The miniature roses that were a birthday present two years ago are flowering again -- which means I've managed to keep them alive all that time!

The miniature roses that were a birthday present last year are still alive, but not flowering. I need to do what I did with the older plants and split them up. What appears to be one mini rose bush is actually four plants. Also moving them into the warmer and lighter conservatory would probably encourage them.

I mentioned planting peas in a previous post, well they've sprouted! They smell of peas. 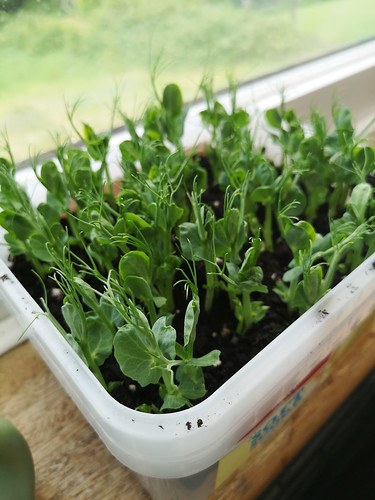 And it's now light enough and warm enough to take my breakfast out into the conservatory, so I have unfolded the leaf on the gate leg table and got the cute owl table cloth out again. The table cloth is waterproof and can be wiped down. 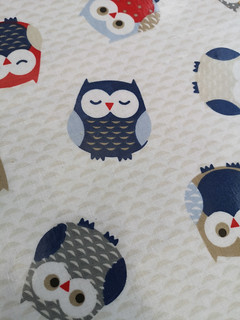