I did another combined bike ride and walk today. I can't walk as far as my husband can, so he set off at 9.15 and then I set off about 30 minutes later on my bike. We met up at the gate to some lovely oak woods. I locked the bike up and hid it behind a building and he showed me some new walks he discovered recently. I do find woods very calming and we're now past the tree pollen season, so I didn't end up with a runny nose.

However, the cycle trail coming home again was very busy. All the tourists have arrived and local people were also taking advantage of a sunny day. It was OK going out, so next time I want a bike ride, I must set off really early to miss the crowd, but by 11.30 it was like the M1. The worst are the family groups of five or six who amble along, completely straddling the trail (which as it was once a railway line is quite wide). They often have a dog or two on expanding leads, so you have to dodge adults nattering to one another, kids wobbling around on tiny bikes and dogs darting back and forth at the end of several yards of lead. Mountain bikes don't normally have bicycle bells on, but I added one to mine. Aggressive male cyclists have no hesitation in shouting, "Cyclist! Coming through!" and ploughing straight on, but after a year or so of me hesitantly shouting, "Excuse me!", I bought the bell which works much better.

Abergwynant woods, just off the Mawddach Trail. There are some lovely carvings dotted around the woods.( Collapse )

These owls are on a bench which overlooks a view of the Mawddach Estuary. 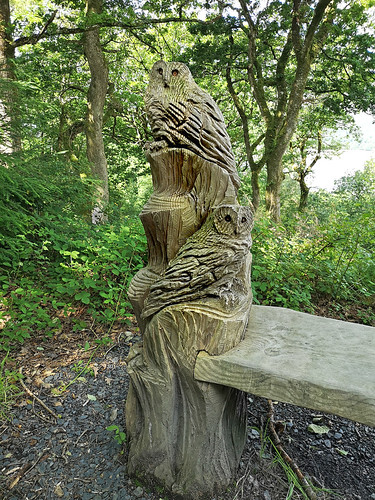 This bench overlooks a view of the Mawddach Estuary and has the name of the mountains opposite carved into it. 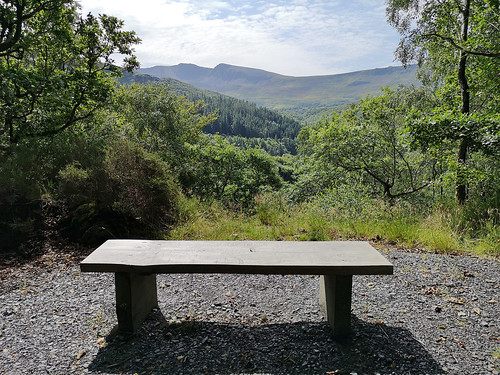