Today is horrible. Strong winds with even stronger gusts and heavy rain. All the leaves are changing colour beautifully, but at this rate they'll have blown away before the weather's good enough to get out and photograph them.

Looking out of the front door this morning, I thought that there'd been a slight disaster involving the wind and a rubbish lorry because at first glance it looked as though the neighbour's trees was festooned with white plastic bin liner bags. They were thrashing in the wind. But when the wind dropped for a moment, I realised that the tree was supposed to be haunted! They were Halloween ghosts. :-) 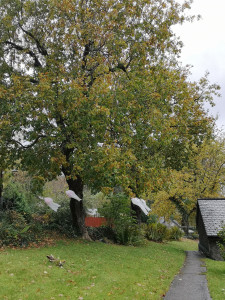 Shortly afterwards, while out in the conservatory putting underwear to dry on the clothes airer, I heard a cry of anguish from G. I immediately assumed the power or internet had gone off. Losing power in stormy weather happens less often than it used to, but can still happen and our internet has been a bit wobbly recently. However, it turned out that he'd discovered that one of the satsumas had gone mouldy! Unfortunately it seems that a previous incident of a mouldy fruit has seeded one area of the wooden fruit bowl with mould spores. Despite washing it after the last mouldy satsuma incident it seems that it hasn't solved the problem and the spores are now attacking any fresh fruit that is put into it. It's now been washed with bleach and has been put to dry slowly, but it may have to be retired as a fruit bowl because I can't see how to eradicate the source of contagion without ruining the wood.

And finally, in more cheerful news, I was thinking that if this weather continued, I was just going to have to buy some waterproof trousers and go out for walks regardless of the rain. Then I remembered that I used to have a pair, but the question was, did they still fit? After a quick search, I found them near the back of the wardrobe and though they would be very tight over trousers, they'll fit perfectly over thick tights, so that's my cold wet weather walkin gear sorted out.

This week's theme was: R is for Ripples

Little teddy enjoys the softness of a crochet blanket.

I had hoped to get ripples on water, but the weather wasn't conducive to outdoor photography at the times when I was free to go out with my camera. We're also under lockdown, so the nearest lake would mean quite a long walk. But then I remembered this blanket I made some years ago. 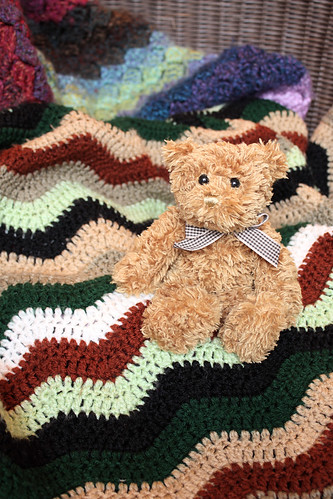