The weather is horribly wet today. I can see a lake on the playing fields in the distance and the water is beginning to rise in the swampy wood beyond the back gardens. Storm Christoph has arrive with heavy rain but, thank goodness, it's not windy. I didn't want to go out because of the rain, therefore I've been scanning some more 35mm slides.

Though I scanned the whole pack, there weren't many that were worth processing in PhotoShop to get them to a standard where I would want to post them to Flickr. The mountains in Scotland look the same as they did in 1968. But I liked the photo of the Clydesdale mare and her foal which has scanned really well.

Unfortunately the weather forecast is also bad for tomorrow. I'm looking forward to the weekend and better weather. 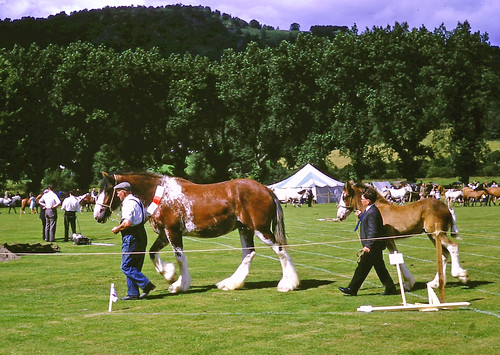 I thought this one was worth posting because you can't take this photo any more. I shot it from the train as it crossed the railway bridge across the Firth of Forth. The Forth Road Bridge was only a few years old (opened in 1964) when I took the picture, but now there's another road bridge beyond it that opened in 2017. 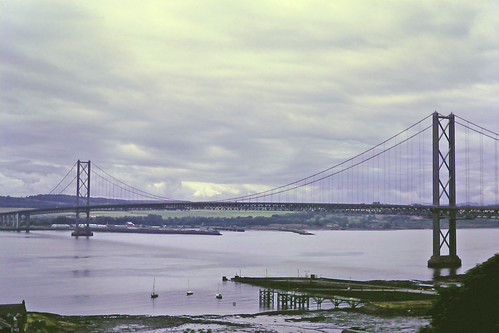 Note: I wrote this post initially in Welsh to post on Journaly, a new blogging site for people to practise writing in the language(s) they are learning. Before I click "Post" I put it through the Cysill spelling and grammar checker but I also put it into Google translate to check that it says what I meant it to say. Google translate is pretty good, except when it goes completely haywire! It translated "mare and her foal" as "mare and her snail"! I have no idea where it got that from because the words for "foal" and "snail" are entirely different.
Collapse