We haven't had the intense cold that the east side of the UK is currently experiencing, but it is cold. I don't know whether we'll get any snow. We've had a few feeble flakes so far, but nothing to speak of.

I did venture out into the cold to shoot some short clips of me using the Say Something in Spanish course while walking. As lockdown makes it impossible (or at least very difficult) to shoot a video outdoors, I'm working on a video that will be mostly shot indoors. This means I have to create a suitable background in my tiny and cluttered study to shoot the talking to the camera part. That now has top priority as I've shot all the other clips needed and recorded my various attempts at the lessons. 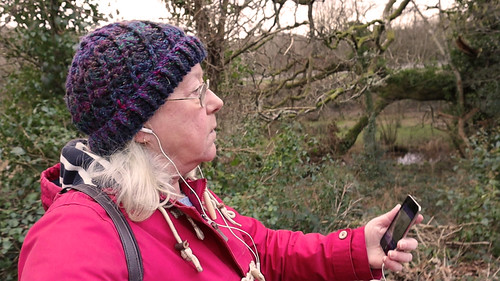 Here's a still from the learning-while-walking video.

I finally opened the parcel of spices from Maggie's Exotic Foods. The little tins of naija spice and pirate stew spice are to replace the ones that are nearly used up and the jollof rice is now also a favourite. I thought I'd try the sweet and hot chilli sauce. Wow! It's hot! Fortunately I took a tiny taste before using it as a marinade on the chicken breasts we're having tonight. I therefore used just a teaspoonful. If I hadn't tested it, I would have slathered it on which would have been a grave mistake.
Collapse