We are trying to go out more to places that are nearby but beyond walking distance -- at least for me. Yesterday we took advantage of a fine day to visit Barmouth. G walked along the Mawddach Trail (10 miles), I gave him a head start and then drove there in time to have a walk along the beach. We met and had a sandwich lunch together on the prom before driving home.

I saw the tractor bring the IRB down to the sea and they launched it. They didn't seem to be in a hurry, so I assume it was just a practice session not a real rescue. 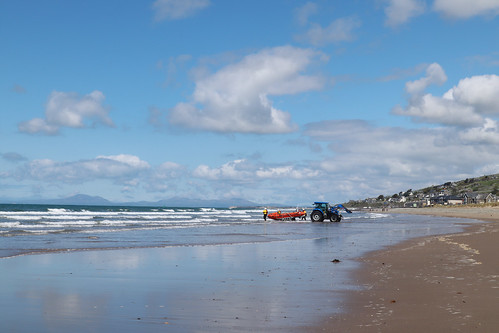 The giant wooden head is new because the old one disintegrated over the winter, having been gradually worn away by the weather over the years. 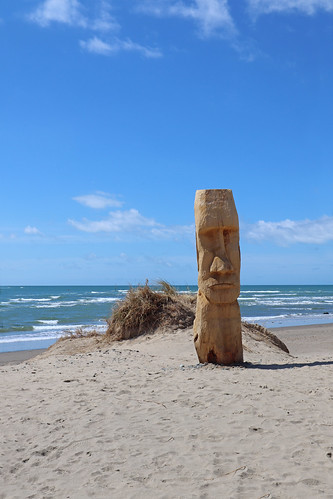 A view across the estuary with Cader Idris in the distance. 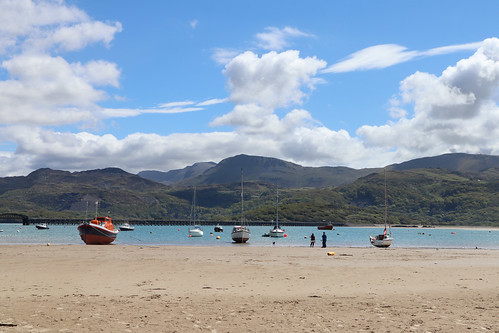 An uneventful trip to the Co-op for the weekly shop. I didn't need so much this week, so it was quicker. Just one little niggle, they keep moving the sanitising station. For ages it was straight ahead as you entered. Then they moved it to over on the left, but it took two visits before I found it because the one way system sends you to the right. Now they've moved it to the right of the door, but hidden behind the baskets as you enter.

There were no apple pies today, for some reason. There was, however, cake and I can see if the Eurospar have pies when I do the top-up shop on Thursday.

In other "exciting" news, I have booked a slot at the recycling centre for Thursday afternoon. In the past you just turned up and queued if they were busy. Now you have to come during a particular time. I thought it might be more precise, but as long as I turn up between 2 p.m. and 2.50 p.m., it will be fine.

Gwynedd council sent me an email confirmation of the booking and though I am a staunch defender of the Welsh language and will respond scathingly to those who talk about "no vowels" (Welsh has 7 vowels) or "looks like a keyboard smash" (no, you just don't know how to read Welsh), they do sort of have a point with the name of the sender of the confirmation email. "fynghyfrif" does look odd because they've squished two words together. It should be "fy nghyfrif", which just means "my account".
Collapse