As a follow up to making pickles, I suddenly had the urge to make bread yesterday. I used to make it regularly in the bread machine, but for some reason got out of the habit and the machine has been sitting forgotten and neglected.

Partly it was because I always made wholemeal bread and since learning about FODMAPs I switched to white bread, but for some reason didn't make my own. Anyway, I had bought some yeast a while ago, fearing Covid bread shortages which never materialised, and I found some rather out of date white bread flour at the back of the cupboard. And voila! A loaf from the bread machine and some Scottish breakfast rolls made by hand. The advantage of using the bread machine is that you don't need the oven on during hot weather. (Not that it's anything like as hot here as it is in the US and Canada!) The rolls cook quickly, so that was OK. 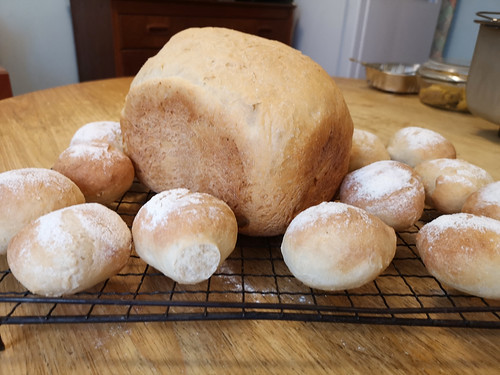