Over on a friend's FB they are discussing lifts -- or I should probably say "elevators" as the question relates to a book set in America. An off-topic comment linked to this video about paternoster lifts, saying that they'd never encountered one. Well I have I have and they are terrifying.

Perhaps there was a fashion for them at one time in university tower blocks in the North of England, but I encountered a paternoster lift in the chemistry department of Salford university in 1969. I'd put the university on my list of possible choices and spent a day there being shown around the department with other potential students. Perhaps you get better at using them with practice, but I found it difficult to judge the speed and distance. When you're getting out of one on the way up, the floor you're aiming for is dropping away. When you're getting in to a lift that is ascending, the floor you're trying to step on is rising. It was also very unnerving to see lab assistants in white coats carrying large carboys of liquid chemicals casually hopping in and out. The paternoster lifts were a large part of why I crossed Salford off my list of universities I wanted to attend!

The video shows what actually happens when the lifts go over the top and start to descend, but rumour was that the lifts tipped over so the ceiling because the floor. Apparently the Salford chemistry students used to sometimes prank visitors by standing on their heads in descending lifts.

I have managed to meet my target so far this month and halfway through the month, I'm half way through my goal!

The story is starting to gather momentum, which makes it a little easier. Gareth has declared he is off to search for the fairies to tell them that he will find the man that killed one of their family.


Otherwise the day has been unproductive. Possibly it's the SAD taking hold. Today was very gloomy and I just wanted to sleep. I wasted too much time reading Twitter, which is always a bad sign.

Anyway, have a photo of a clump of fungus. Yesterday I suddenly realised that what I had thought were piles of dead leaves were actually large clumps of toadstools. I don't know what kind they are. I'm 100% certain they're not edible. They'll be growing on the decaying roots of the trees that had to be cut down because they had outgrown the space. 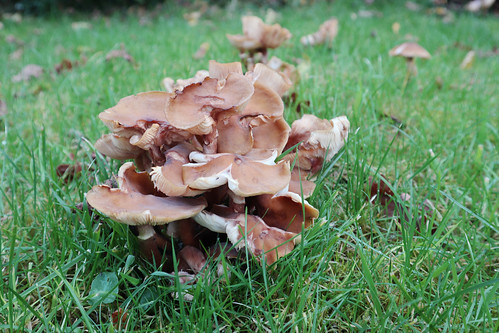