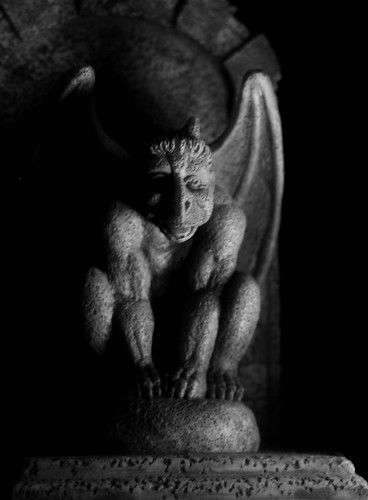 Low key gargoyle, a photo by Helen in Wales on Flickr.

This is a photo of one of my gargoyle bookends. I'm quite pleased with the effect, considering how makeshift it was.

I draped a piece of black sweatshirt material over the basket chair to make the background and placed the ornament on it. I couldn't be bothered to walk downstairs for the tripod, so I placed the camera on the middle-sized nesting table with a folded crochet doily under the lens to raise it a fraction of an inch and steady it.

It was night and the curtains were drawn and the door closed. The illumination was provided by the glow from my iPod Touch which I placed near the ornament, resting against a Rubik's cube which just happened to be handy. To avoid shaking the camera, I used the self-timer set to 2 seconds.

All it then needed was a slight crop in PhotoShop Elements and a conversion to black and white to get rid of the slight blue tinge.