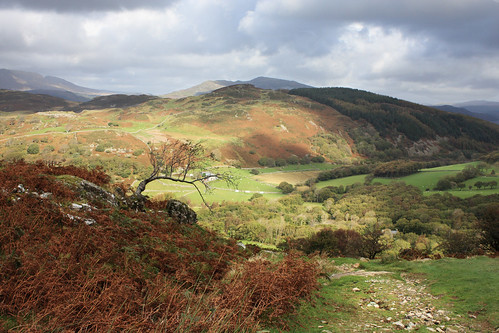 View from Cadair Idris, a photo by Helen in Wales on Flickr.

I think this was actually a challenging theme for everyone. Most people live in cities or towns, so they don't have easy access to interesting landscapes. My problem was slightly different -- I live right by some of the most beautiful scenery in Britain, so I felt under some pressure to produce a decent photo.

However... the weather has been poor all week with low cloud and drizzle. This morning, the cloud had lifted -- though not gone away! -- and I took a chance on finding something interesting.

I took 33 shots, most of which I have now deleted because they were blah. I had actually started to descend when I took this. I didn't have all that much time, so there was no way I was making it to the summit, even if I'd felt fit enough to go all the way to the top.

Just for an instant, the sun broke through a gap in the cloud. A moment later, the light had gone again and the tree was lost against the dark hillside, but I had managed to grab the shot, so went home happy. :)