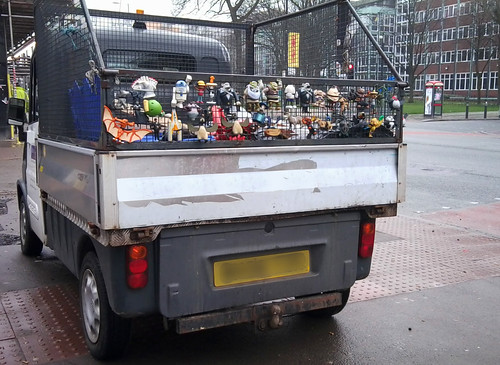 An embellished refuse lorry, a photo by Helen in Wales on Flickr.

I was struggling with this one because looking around the house I realised that most of our stuff is very plain. I could have used a book, but I used books just the other week. Our local town isn't much better, plain stone houses with plain slate roofs. But this weekend we had a trip to Manchester and this workman's lorry caught my eye.

The shot was taken by one of the Manchester University buildings and the driver was doing some cleaning up nearby. Presumably, the toys he has embellished the back of the lorry with are ones that he's found lying around lost.

I love the idea that they have been rescued and will now spend their days being driven around the university, brightening up an otherwise dull and utilitarian lorry. :)

I have to admit that I chickened out and took this with my phone rather than with a camera. I didn't actually have my DSLR or the Canon PowerShopt with me, so the phone is probably as good as the little Olympus, but the workman was just off to the left, cleaning a sign and no one notices people with phones but they do notice cameras.