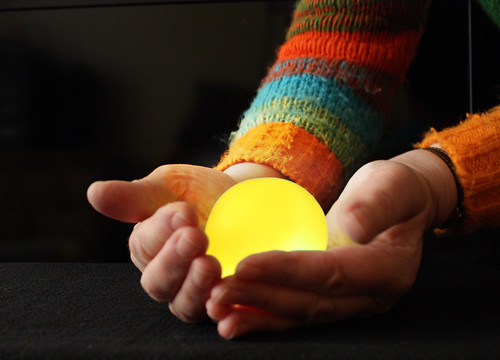 Glowing ball, a photo by Helen in Wales on Flickr.

This week's theme was: Lights

I normally try to take two separate shots. In fact the different themes usually mean that I have to anyway, however, I don't have much time this week, so I'm pleased to say that this shot fits perfectly for both because the T189ers weekly challenge is "I is for image manipulation".

I took the shot using manual settings because the camera kept over-exposing the ball. I also used the timer so I could photograph my own hands. :) The shot was in RAW, so I processed two versions, one with the white balance correct for the hands and sweater and the other a slightly brighter version with the white balance set to make the lemon yellow of the ball into a more golden glow. Both images were then combined in PhotoShop Elements.

This wasn't actually my first idea, but while I was playing around with the toy balls that flicker with light if you bounce them, I realised that I could achieve something like the Magelight so well described in The Tough Guide to Fantasyland.

"Magelight or Magefire is so common among MAGIC USERS that it is probably what an APPRENTICE WIZARD learns to do on his first day. The operator simply think, and a small ball of bluish or white light appears either on the hand or hovering in the air. [...] Magelight has two uses: it gives light in dark places, and it shows that the maker can do MAGIC. When a more powerful Magic User overwhelms the one making the light, the Magelight normally flickers and dims away. Thus it is also a sort of Magic meter. It is otherwise not good for anything much, but it would be nice to be able to do it."