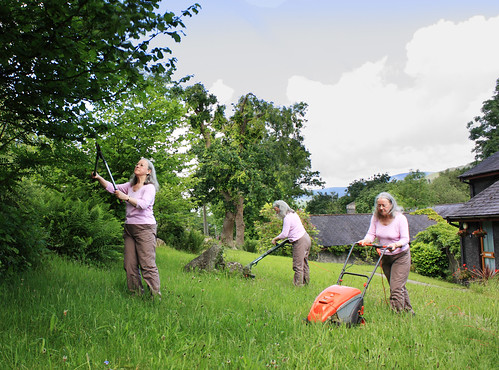 Busy gardening, a photo by Helen in Wales on Flickr.

Normally I take separate photos for the two photo-a-week groups I belong to, but sometimes the themes just ask to be combined. This is one of those weeks. :)

We had a lot of fun with the multiplicity shots last year in the T189 group, though I made some mistakes when I took my multiple photos which made it harder than it should have been to combine them. This time I remembered to use manual settings, though I did have to watch the light because the sun kept going behind the clouds and the light was changing quite quickly. Anyway, this time the three images combined much more easily and having taken the photos outdoors, I had more room to play with.

Unfortunately, once I'd put the camera away and actually had to get down to some real work, there was only one of me. :)