The view from Brith's house 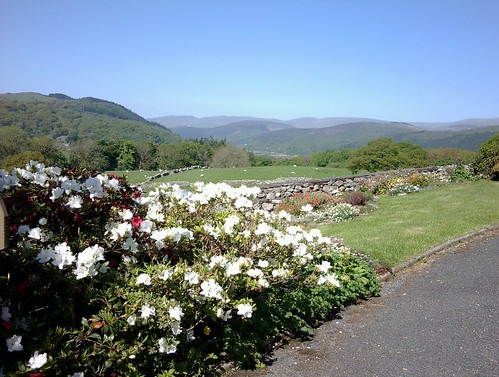 The view from Brith's house, a photo by Helen in Wales on Flickr.

It was a gorgeous day yesterday when I went to walk Brith. I snapped this with my phone just before collecting him. He has the most spectacular view from his garden.

It was a good walk, not too hot for him, but I've started carrying water again and so we both had a drink at the halfway point.

We didn't see the aggressive black Labradors, but we did have to pass a Border terrier. When I first started walking Brith, that would have caused a total freak out, but though he did bark a couple of times and I had to hold his harness and march him firmly past, he recovered quickly and just a few metres beyond the dog he stopped and accepted a treat. He used to get so tense that even holding a treat against his lips produced no response.

In other news, I have successfully completed the final assignment for the TEFL course and I have a rough draft of the final OU essay. I swear I am not doing any more academic courses that involve assignments and deadlines. I do want to get back to improving my Welsh though and I'm thinking of learning another language, just to keep the brain active. I may even start writing again, but if I do, it will just be for me, as a hobby.

And in other other news... I'd been wondering whether to upgrade my phone to a full smart phone, so I went on the Vodafone site yesterday to see what was on offer. I very quickly decided that I wasn't paying £37 per month for a fancy new phone, but I discovered that I could pay £10.50 per month instead of the £10.70 I have been paying and get more inclusive minutes, unlimited texts and some data included in the contract. Previously data wasn't included and I had to pay a daily rate if I wanted to use the Internet on my phone.

I scrutinised the page for some time, looking for the catch, but so far it does look as though from now on I'll get more calls, texts and 250mb of data for 20p less per month than I have been paying. :)
Tags: 52 weeks, photo-a-week, photography
Subscribe