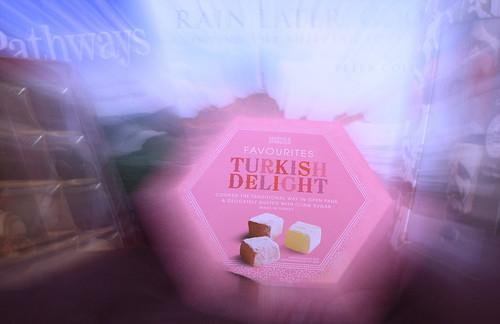 Turkish delight and Christmas presents, a photo by Helen in Wales on Flickr.

The set theme was: Z is for Zoom

In this photo I've used the zoom burst effect on my Christmas presents. :) Basically, you choose a slow shutter speed and twiddle the zoom ring to zoom out as the photo is being taken. For this shot, I actually combined two images, a normal in focus shot of the presents and the zoom burst version. Thus I could get the centre of the Turkish Delight box sharp with the zoom burst effect radiating around it.

I will, however, do the T189 alphabet challenge again. The "T189" relates to the digital photography course run by the Open University that I did back in 2007. It was really popular and many of the students who did it still keep in touch on Flickr. This group is much smaller than than the 52 in [current year] groups and there is no weekly contest with voting. On the one hand the voting does make you really look at all the photos, but on the other hand, to do it properly takes a lot of time and I just feel I want a break from it.

Anyway, hope you are all having an enjoyable Christmas. As we've got older, our Christmases have become increasingly low key, but we like it that way. :) Having said that, we'll be off to London on Friday for a short break before the New Year.

Nadolig llawen i chi i gyd! / Merry Christmas to you all!