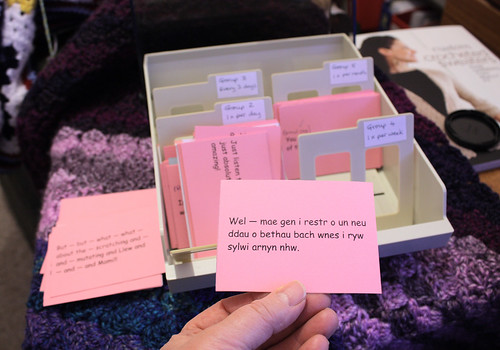 Learning Welsh, a photo by Helen in Wales on Flickr.

Due to life getting in the way during the second half of 2013, my Welsh was getting very rusty. This year, now my OU study is complete, I want to make Welsh a priority.

I like the spaced repetition method of learning, but I memorise complete sentences not just words. I could use an app on my iPod Touch, but I just prefer using actual cards made out of cardboard. :)

I have also found a site that could have a lot of potential for keeping me motivated. I came across giveit100.com completely by chance, but I've signed up and I'm giving it a try.

The idea is that you upload a 10 second video each day to show how you're progressing. There are people learning all sort of things, like playing guitar, Irish whistle, learning to draw, learning ASL, doing yoga etc etc.

The site is very new and definitely in the early stages. At the moment you can only sign up if you have a Twitter or Facebook account, but I do think it's an interesting idea. It just remains to be seen whether making the videos starts to get onerous, but it's something I would like to get better at anyway. New this year is the ability to have more than one project going and once G is back in the college and I can have a bit of time alone each day, I'm going to add hooping too. :)