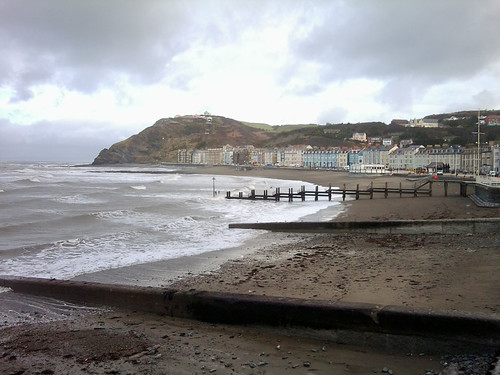 Aberystwyth promenade, a photo by Helen in Wales on Flickr.

I did a quick dash to Aber this morning to do a few things that required me going to a Big Place (relatively speaking!). I took a moment to walk through to look at the prom. Considering the horrendous storms, it didn't look too bad, though having said that, most of the damage is down the other end, so it's probably deceptive. There was a digger working on something and lots of warning tape.

Anyway, I managed to bank a cheque for my father. I don't know how he chose the bank he uses, but the nearest branch to me is in Aberystwyth, which is 1 hour's drive from my home. I'd been putting off going, but it was a large cheque, the money from the bank accounts of his that we closed due to them being a total pain in the neck, and I didn't want it turning into a pumpkin (our phrase for anything that expires or becomes invalid due to some time restriction). However, as well as the flying visit to the bank, I also managed to buy a new sweater in Monsoon, so I have another item of clothing smart enough to wear for work. I am planning on making 2014 the Year of the Sweater, but it will take time to sort out patterns and yarn and actually crochet something, so I gave in and bought one.