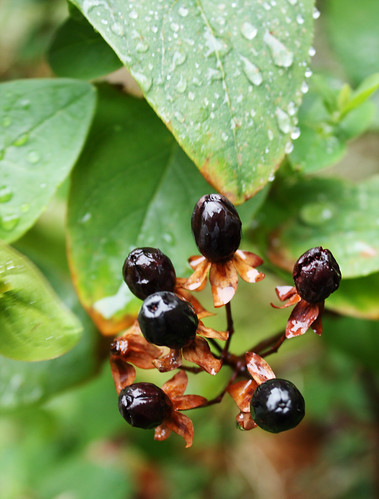 Tutsan berries, a photo by Helen in Wales on Flickr.

This tutsan plant (Hypericum androsaemum) appeared in the garden last summer. It had pretty yellow flowers and had planted itself in a sensible place, so I let it stay. It has had these black berries on it all winter. They're just starting to burst.

Oh, and as you can see, I've found myself another 52 week group on Flickr. Despite the name, this isn't the same group as the 52 in 2012 and 2013 that I joined. I enjoyed the challenges that group set, but I didn't join this year because it had started to become tedious rather than fun as the same topics were coming round again for the third time. It was also frustrating trying to achieve a particular topic when the weather and work schedule were against me. This different 52 in 2014 group has a more laid back approach. There are 52 topics, but you can take the photos in any week, so it will be much more flexible and I will no longer be struggling with the weather or gnashing my teeth in frustration because I have the perfect shot but it was take a day too early or late.

The other good thing is that if you want, you can upload up to 2 photos per week. That means that even though I started late, there's no reason why I can't bag all 52 subjects.
Tags: 52 weeks, photo-a-week, photography
Subscribe